Imagine stacking shelves at your retail job when suddenly your partner rocks up in full wedding attire with a priest and says if you don’t get married on the spot, it’s over. For one poor fella in the US, this is not something he has to imagine anymore, and it was all captured for us on TikTok.

Two videos posted by @boymom_ashlee show the moment she was shopping in Target when suddenly a bride hobbled around the store in a wedding dress, looking for her fiancé.

She wrote that watching this woman “hunt her man down” was the “best part of her week”. The bride probably felt the same way.

@boymom_ashleyPart 1. The best part of my week???? watched this woman hunt her man down that works at target !!   ##target##bridzilla##lasvegas♬ original sound – Ashley

In the first TikTok, the bride storms into the store and clops around with her bridesmaid and priest.

A few people noted that the bride’s dress was not fully zipped up and that she walked as if her shoes were on the wrong feet.

Everyone else just made the same damn joke (not that it wasn’t hilarious, of course). 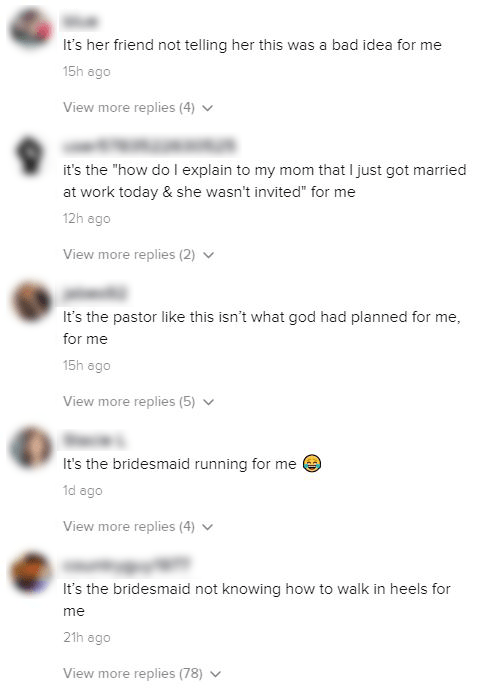 For me, personally, it’s gotta be the hem of her white dress picking up god-knows-what from that filthy looking floor.

After chasing down the scent of her man inside Target, the bride gave him an ultimatum.

@boymom_ashleyThe best part of my week???? part 2 watched this woman hunt her man down that works at target !! ##target##bridzilla##lasvegas##fyp##fypシ♬ original sound – Ashley

“You put this ring on my finger two years ago, and either do it or get out,” she told him, in front of everyone.

“Either we’re getting married right now, or I’m leaving.

“I’m done, like if you don’t marry me this second… I’ve got the pastor, I’ve got Emily, she’s my bridesmaid.”

That’s when the bride noticed she was being filmed on TikTok, and showed not a hint of embarrassment (or self-awareness).

“Hi guys, I’m just finally making him commit, you know?” she told us from the other side of the camera.

The consensus among commenters this time around is that it’s pretty fucked to force marriage upon your partner at their work like this. The dress may be white but she’s a walking red flag.

The fiancé’s response was to take things outside, which seems pretty reasonable when someone just storms into your workplace and causes a scene.

The last we see of the bride is her walking out, shaking in excitement.

At least they all wore their masks, hey.