‘What A Horrible Thing To Do To A New Mum’: Fans Slam Celeste Barber’s Tammy Hembrow IG Story

Influencer Tammy Hembrow has fired back at Celeste Barber for mocking her post-baby video.

Last week, Hembrow posted a video of herself in the mirror and wrote: “12 days postpartum I stayed as active as possible before & during my pregnancy on my @tammyhembrowfitness programs.

“I honestly feel like my core was at its best in my whole life just before I fell pregnant with Posy so I’m excited to see what I can do this time round after baby number 3!

“Can’t wait to get into some hard & heavy TammyFit at 6 weeks.”

She concluded the caption by adding, “PSA: every mother’s postpartum journey is different! Please DO NOT be hard on yourself or compare yourself to others. We all have different genes, different lifestyles, different circumstances etc. That being said I work & have worked extremelyyy hard & want nothing more than to motivate & inspire you!”

Barber reshared Hembrow’s video on her Instagram Story to her 9.1 million followers and wrote: “No disrespect, well done on your success but this is dangerous.

“Women should NEVER feel as though they need to put on activewear and show off their bodies, to prove a point ESPECIALLY 12 days after having a baby. 12 DAYS!”

She added, “Jeez I was shitting in a bag and screaming into a pillow after having my babies. How we look is irrelevant. Be kind to yourselves, moisturise your nipples and unfollow accounts that make you feel like shit!”

As spotted by Aussie Influencer Opinions, Hembrow fired back at Barber in the comments of her post.

“I’ll wear whatever I want @celestebarber,” she wrote, tagging the controversial comedian.

Hembrow’s fiancé Matt Poole also commented, writing: “Wear whatever you want. Be kind and do whatever makes you happy. 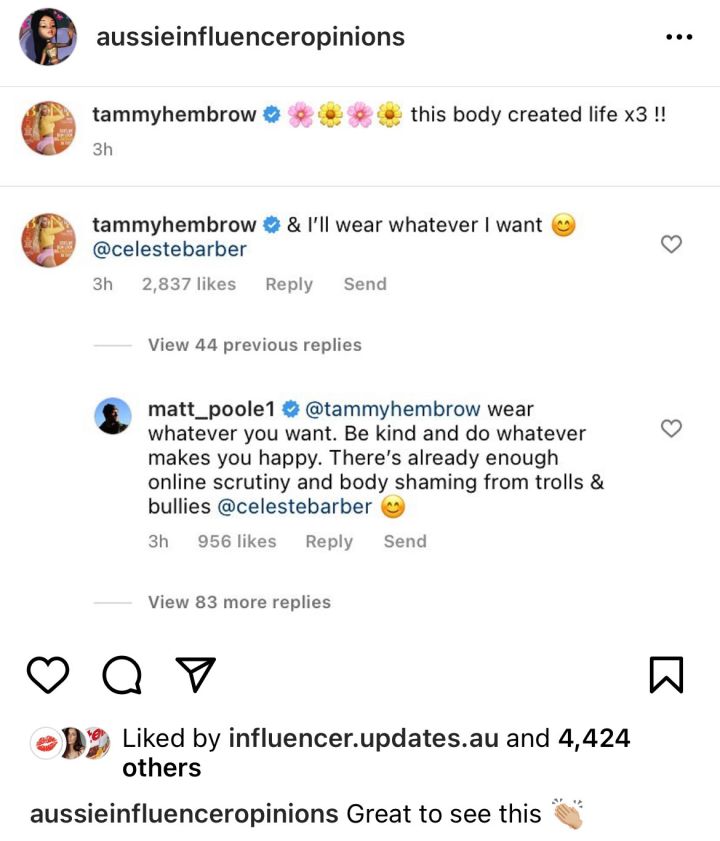 Aussie Influencer Opinions captioned the post “Great to see this” with an applause emoji.

The post has since copped scores of comments calling Celeste Barber out for shaming Tammy Hembrow shortly after giving birth.

“How can it be body positivity if a mother of three is being told to cover up? It’s the complete opposite,” one person wrote.

“Celeste was funny but now I feel like it’s pure hatred. What a horrible thing to do to a new mother,” another person wrote.

“@celestebarber you are way off on this one,” added another fan.

“It’s about damn time we stop putting other women down who are confident in themselves,” wrote another follower.

“Celeste makes a living off scrutinising other women but says she’s an advocate for women??? She bullies women who are fit and have a healthy lifestyle like Tammy does but because it’s through a comedic lens everyone let’s it happen,” read another comment.

And finally, this comment contrasted calling out Tammy with Barber’s bit where she parodies poses truck by models: “Celeste built her ‘fame’ off bringing down and making fun of other women, she is the last person I would listen to when it comes to body image.”

Celeste Barber and Tammy Hembrow are both local online personalities.