Facebook has banned news for all Australians. Your news feed is looking very, very different. A bit confused? Don’t worry, so are a lot of people. Facebook’s move came as a surprise to everyone – including the government.

In short, it’s not happy with the government’s proposed Media Bargaining Agreement. The proposed law, which passed through the House of Representatives last night, would force tech giants like Facebook and Google to pay Aussie news outlets for sharing their content.

Within a few hours, every Australian publisher – including PEDESTRIAN.TV – had their Facebook pages wiped. 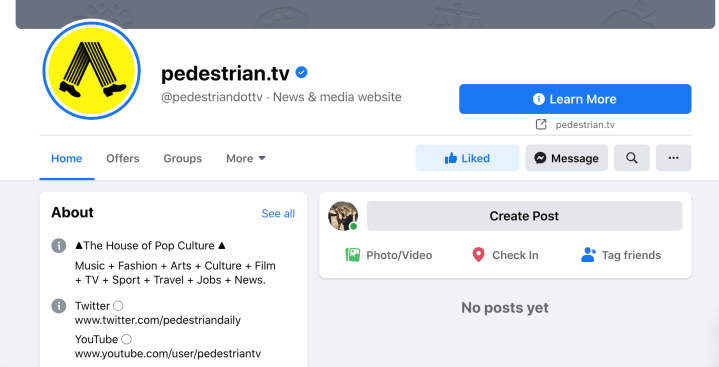 Why did so many non-news outlets get banned as well?

It wasn’t just news outlets that saw their Facebook pages torpedoed. Government pages, domestic violence services, satirical websites (like The Betoota Advocate and The Shovel), and even Facebook’s own page were nuked, too.

Facebook says this was a mistake – at least when it comes to government pages like health departments.

“As the law does not provide clear guidance on the definition of news content, we have taken a broad definition in order to respect the law as drafted,” a statement read.

“However, we will reverse any Pages that are inadvertently impacted.”

Why is the government pushing ahead with this law in the first place?

The argument is that the media bargaining code will “level the playing field” between news publishers, which have seen their advertising revenues decimated in the last decade, and tech giants, which are part of the cause.

News organisations argued that Google and Facebook made money because of their content was shared to those platforms. However, G&F feared it would set a global (and rather expensive) precedent, so threatened to block all Aussie media entirely.

Well, Facebook has now made good on that threat.

Did we see this coming?

Nope. Facebook had warned it might walk, but it made no indication we’d all wake up Thursday morning to find our news feeds scrubbed.

Treasurer Josh Frydenberg told media today he was given no notice, despite having Mark Zuckerberg on the blower on Sunday.

“Facebook’s actions were unnecessary, they were heavy-handed, and they will damage its reputation here in Australia,” Frydo said.

“Their decision to block Australians’ access to government sites – be they about support through the pandemic, mental health, emergency services, the Bureau of Meteorology – were completely unrelated to the media code which is yet to pass through the Senate.”

He said he spoke to Zuckerberg again this morning for about 30 minutes, and it was a “constructive” conversation.

“I think there’s some differing interpretations as to how the code would work.”

Listening to Frydo this morning, you’d think Google was our new best friend. He thanked the tech giant for “very constructive discussions” over the code. It’s a bit of a turnaround from Google’s earlier tactics, which included asking YouTube creators to swarm the ACCC’s website with objections.

It was reported yesterday that Nine Entertainment (which owns Pedestrian Group), inked a deal with Google worth around $30 million per year to feature its news in Google products. (It’s not an official announcement, and please don’t take this explainer to be a confirmation of that figure – I’m the deputy editor of PEDESTRIAN.TV, those decisions are way above my pay grade.)

In fact, Facebook mentioned this in its blog post, saying it was taking a different approach because “our platforms have fundamentally different relationships” with news and content.

“Google Search is inextricably intertwined with news and publishers do not voluntarily provide their content,” it said. “On the other hand, publishers willingly choose to post news on Facebook, as it allows them to sell more subscriptions, grow their audiences and increase advertising revenue.”

You know what? I’m not even going to link to it. You can Google it, using my new best friend (Google).

First of all, the code isn’t law – yet. It still needs to pass the Senate. I imagine there will be several more phone calls between our government and Mark effing Zuckerberg before that time.

What does this mean for me?

Well, you won’t be able to get your news through Facebook anymore! It is now exclusively the domain of Facebook Marketplace, chaotic Facebook groups, and the birthday reminders for people you haven’t spoken to in a decade. Fun.

But don’t worry, you can still stay up to date with PTV. Here’s how.