Ugh, remember the Janoskians? Well, at least one of them is back, and he’s now making tickle torture videos with… *checks notes* his mum.

That’s right. Online fiend, occasional rapper and pube entrepreneur Beau Brooks has pivoted from making awkward prank vids in suburban supermarkets to letting his mum Gina tickle him on camera in a way which somehow way more awkward than anything the group put out back in the 2010s.

“If you cough while I’m tickling you, then I get to take a deck of your cigarettes,” Brooks said to his mum, before offering to go first to show her how it’s done.

According to Brooks, he may or may not have sharted himself from all the tickling thanks to a recent bout of salmonella. He did not provide evidence for this claim.

At the end of the video, Brooks asked his mum if she’s proud of him for flogging his pubes on the internet, among other bodily byproducts.

Her answer: “Yes, of course I am… not about the pubes though.”

Unlike Instagram, where Brooks has built up his following from scratch relatively recently, people in the YouTube comments were shook to see a new Janoskians vid after they – like most of us – forgot about the channel in like 2013 or something. 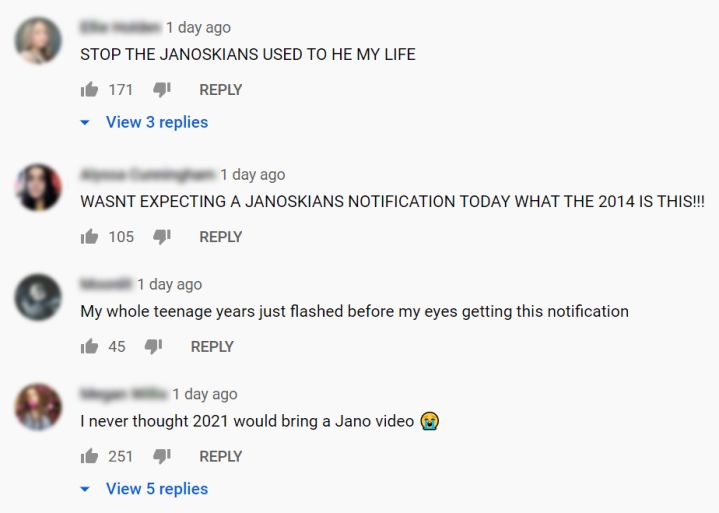 Brooks is the second old school Aussie YouTuber to start uploading again out of the blue, with Natalia Tran a.k.a. Communitychannel posting her first video in years back in December.

But don’t expect this particular comeback from the Janoskians to turn out like the documentary Tickled.

Brooks told PEDESTRIAN.TV that in the next couple of weeks he plans on uploading a video of him getting his belly button pierced, as well as getting a blue eyebrow tattooed on his face (he didn’t say where, exactly) to raise awards for chemo patients.

So at least that’s a wholesome close to a decidedly un-wholesome chapter of the Janoskians’ general online presence.