Bow Down To This Man, Who Sucked A 10-Inch Dick That Ruptured His Airway

Remember this Tweet? It went viral back in 2018 because, OBVIOUSLY IT DID. 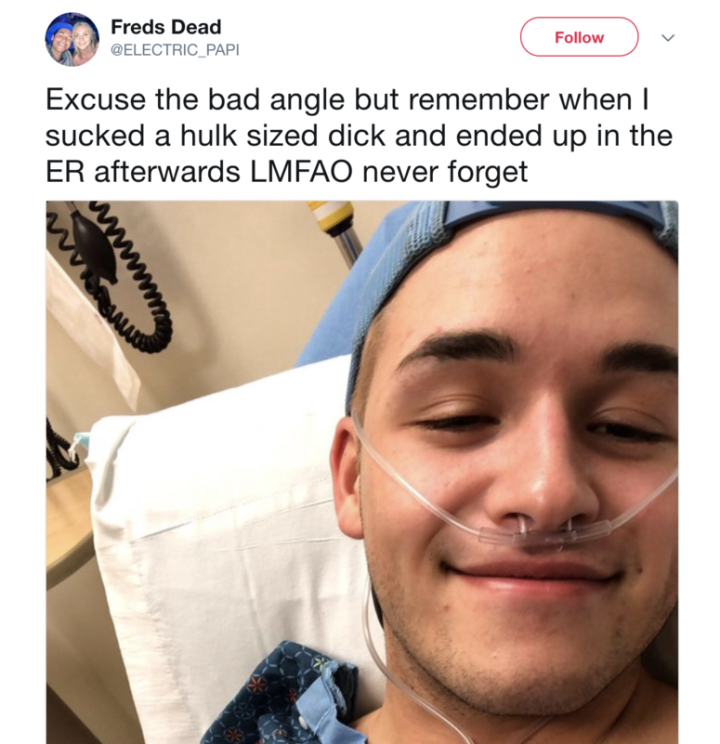 That guy is Fredy Alanis, a now-legend. The 19-year-old says sucking a guy from Grindr’s 10-inch dick ruptured his airway, which landed him in hospital – where he took this infamous selfie.

“He’s my old neighbour who I found on Grindr,”  Fredy explained of the guy involved. “He’s, like, four years older than I am, so I knew who he was, but we never hung out or anything before.”

Fredy goes on to say that at first, he didn’t realise anything was wrong.

…It was just this soreness in my chest. Nothing really hurt that bad. I thought, maybe my chest is just sore from what took place, and I didn’t think anything of it. I woke up the next morning, and the pain was still in my chest and it was sharp. I was hunched over and crying.

Although when he first felt something was up, he didn’t stop.

I wasn’t gonna stop. In the heat of the moment my will power willed me to continue. Stamina.

Not associating it with his sex life, Fredy went to the doc.

When I went to the doctor, when they said there was a rupture in my airway, they said the only thing it could possibly be was last night. I didn’t tell them exactly what happened because my mom drove me to the hospital. I told my mom that the night before I was violently coughing. I had to pull something out of my ass really quick to cover it up. I was in the hospital for three days. I felt like, eventually, I had to tell the doctors exactly what happened to be treated the right way. It was January 3rd, so I was starting off the new year in the hospital.

Fredy did tell the Grindr dude straight away – and they’ve actually hooked up since (although more cautiously).

I’ve actually seen him since then. I saw him two weeks ago, I’m not even going to lie. I told him what happened and since then when we decide to hook up or whatever he is a lot less rough. He’s more cautious and aware of what he’s doing. I don’t want to be in the hospital! He told me he felt so bad. He works in an ambulance so he’s pretty aware of the human body and what’s possible. I was texting him on my way to the hospital and I said my chest is really hurting and he said he hoped he didn’t cause it because he knows it’s possible.

As for his parents – his mum still doesn’t know the injury was sex-related, but Fredy reckons given the post’s reach, it’s only a matter of time.

My post has made it to Facebook and I guess it’s circulating there, so it’s a matter of time. I have accepted the fact. I have to let them see it on their own.

Absolutely iconic, someone please give Fredy his own talk show about sex. He deserves it.