March is Sustainability Month at PEDESTRIAN.TV – every day until Earth Hour on March 28th, we're bringing you all the facts around how you can get involved, both politically and personally, in fighting for climate action. Want the basics? Head here.

Have you ever *really* thought about how much garbage you accumulate on a weekly basis? Look, probably not. But I have.

My cess pit of a brain has been thinking a lot about garbage lately, specifically about how much I personally contribute to landfill without even trying. So in the name of science, I thought I’d conduct a little experiment.

For the last seven days, I have taken note of every piece of garbage I’ve accumulated. Coffee cups, that weird plastic that your frozen pizza is wrapped in, receipts, everything. Unless it contains bodily fluids (toilet paper, tissues, etc), this is absolutely everything I sent to landfill in one week.

I am far from a zero-waste queen, but after following influencers/blogs like Trash Is For Tossers for about a year, I like to think I’d have a reasonably low waste life. But I guess I’ll let my trash do the talking.

As Pedestrian.TV’s night/weekend writer, my work week actually starts on a Thursday, so we’re calling this day one.

I remembered my Keep Cup (bonus points because I also made my coffee at home) on my way to the office.

Unfortunately, I am a carb monster and bought myself a little treat from Baker’s Delight on my way to work, so that’s my first piece of garbage for the week.

I also caved and bought a packet of individually-wrapped Kinder Easter eggs because I am a sucker for festive treats. I’m going to call this a big loss because they’re all individually wrapped AND they come in a big ol’ plastic bag.

Friday was my first complete zero-waste day (kind of).

I used my Keep Cup three times today and managed to stay away from any sort of disposable food waste. I ate a handful of Kinder Easter eggs (they were delicious, thanks for asking) but I already accounted for this waste yesterday.

I packed my lunch in a reusable container and brought my own cutlery from home. Win!

Technically, I wasn’t entirely zero-waste today because my therapist had to give me a receipt for tax/Medicare purposes. But we’re going to call it zero unnecessary waste.

It’s the weekend, which means I work from home. Usually this means I don’t leave the house at all (and therefore don’t use any waste) but unfortunately I caved today and bought a sushi roll because I missed Japan.

They packed my sushi in a paper bag, but it’s one of those shiny paper ones so I’m not entirely sure it’s recyclable. I also used a soy sauce fish and a packet of wasabi.

On the plus side, I made my coffee at home, so I didn’t contribute to any coffee cup wastage today.

It’s Sunday, which again means I work from home. I made all of my coffees at home using pre-made cold brew that I batch-brewed earlier in the week, which means no takeaway cups. Win!

Today I was a little bit more organised and baked a batch of vegan cinnamon buns (delicious, btw) instead of splurging on sushi. Unfortunately, I lined the baking tray with foil because I’m lazy and forgot that this was added to my waste tally for the week.

On a positive note, I didn’t actually buy anything at all on Sunday, so I only made waste that I had already technically used.

Although Monday is the start of everyone else’s week, its technically my Friday, so I’m inclined to become pretty lazy. Thankfully, I remembered my Keep Cup today for all of my coffees (which has been pretty consistent now across the week).

I did end up picking up a cup of 2 minute noodles on my way home from work because I have a flight to catch in the morning and frankly couldn’t be fucked cooking an actual dinner. Oops.

Aaaaand now we’re at my downfall. I had to fly to Sydney for work on Tuesday and I’m fairly certain I used more rubbish in one day than I have for the whole week so far.

For starters, I forgot to check in online, so I had to print out my ticket at the airport. Waste.

Then, I splurged on an english muffin, a hash brown and a coffee from McDonalds because I was a tired gremlin. Waste, waste, waste.

If you thought I stopped there, think again because we’re only just getting started. Throughout the day I bought another two coffees (all in take away cups) and a bottle of water.

On a slightly more positive note, I made the conscious choice to not use straws in my drinks all night because I am an ally to the turtles. 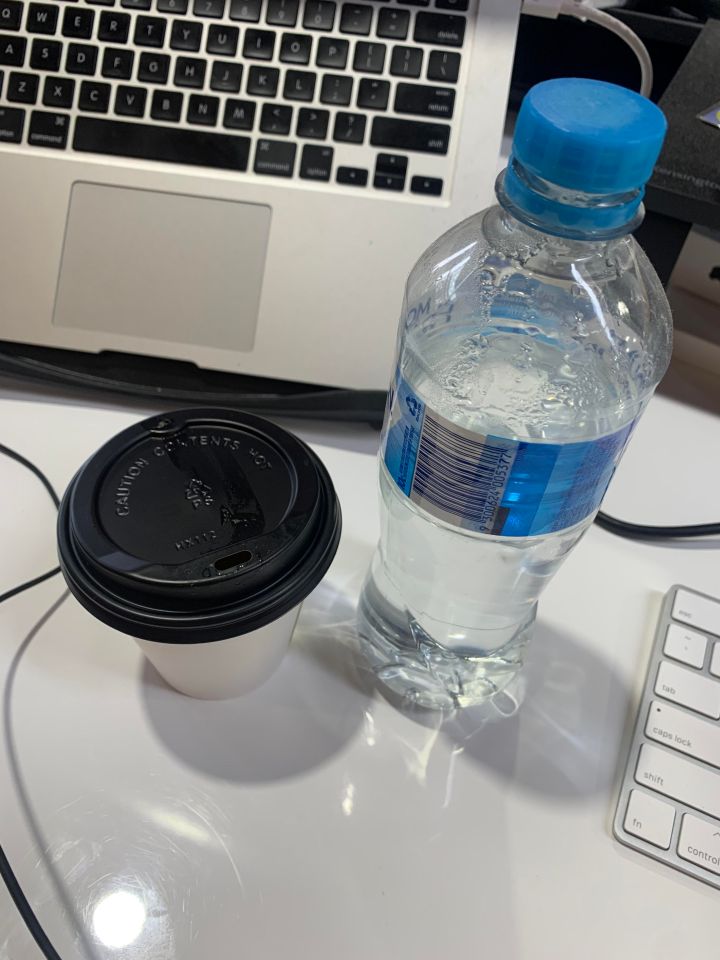 One of many coffees I consumed today. Not pictured: airport coffee and after lunch coffee.

As expected, I woke up feeling slightly hungover on Wednesday morning because it’s technically my weekend so I *maybe* went a little too hard on the wines last night. In a desperate attempt to consume some calories without vomiting, I bought myself a Boost Juice. Unfortunately, I didn’t even get to finish it before throwing it out because I thought I was going to vomit.

Again, forgot to check in online so I had to print out my plane ticket at the airport. And again, I went to McDonalds because I was determined to eat something before I got on my flight. Fries and a frozen coke (hangover saviour) later, I was ready for my flight after being a total trash demon in Sydney.

Upon returning to Melbourne I wasn’t in the mood to cook dinner, so I picked up a frozen pizza from Coles.

If I’m being completely honest, I did a lot worse than I thought I was going to do this week. But hey, at least this is a learning experience for all of us.

For starters, receipts are a bitch. They’re not recyclable and they’re really hard to avoid. My therapist was legally required to give me a receipt and both McDonald’s workers needed me to take the receipt so I knew my order number. I didn’t really think of this as a waste contribution before this experiment, but for everything I bought, I ended up with double the waste because of this useless piece of paper.

As simple as it sounds, remembering my Keep Cup was a huge saviour this week. As a multiple coffees per day kinda gal, I saved at least 2-3 coffee cups from landfill by bringing my own cup (and saved money).

I think I would’ve done a lot better if I didn’t have to yeet myself to Sydney, but that in itself is a learning experience. Travelling produces a heap of waste, simple choices like checking in online can help make a difference. I ended up sacrificing things like my glass water bottle and Keep Cup for the convenience of not having to lug them to Sydney and back.

It turns out I’m contributing a hell of a lot more to landfill than I thought, and you probably are too.