What The Hell Is Going On In Canberra Right Now? #LibSpill Explained

For the past few days, there has been a lot of talk of a challenge to Tony Abbott‘s leadership. The Prime Minister’s widely-criticised decision to award a knighthood to Prince Philip definitely didn’t help his standing, and the LNP backlash in the Queensland election got many talking about whether Abbott could lead the Liberals to success in the next federal election. Talk of a revolt against Abbott reached a fever pitch overnight, but what exactly is going down in Canberra? Here’s the situation as of this morning:

Has there actually been a leadership challenge in Canberra?

So why has #LibSpill been trending so goddamn hard?

Well, there are a lot of people who are very keen to see the back of old mate Abbott, and overnight, a lot of these people jumped the gun on Twitter, making it seem like shit was going down – which it was, sort of, but not to the extent that we have a new Prime Minister this morning.

It’s difficult to say right now, but probably? A number of Liberal backbench MPs – rumour has it, as many as 30 – have expressed their doubt at the direction the government is taking, and Abbott’s leadership in general. There have calls for a party room ballot next week, at which time, he could be replaced as leader.

Who in the party is behind all this?

There are three people specifically – WA MP Dennis Jensen has demanded a leadership ballot, after weeks of dissatisfaction with Abbott in the lead-up to that whole highly unfortunate knightgate incident. A lot of the heat is coming from Queensland, with MP Warren Entsch saying he would support a spill at next week’s party room meeting, and Mal Brough declaring he has lost confidence in the PM, and wants the leadership issue resolved.

Julie Bishop has ruled out challenging him, right?

Not exactly. She has ruled out a direct challenge, but if the position of leader happens to be vacant and there happens to be a ballot, she reserves the right to put her hand up.

What about Malcolm Turnbull? People seem to like him?

Informal polls, like the below one conducted by News Limited overnight, show that many Australians apparently prefer him as leader. Much like Bishop, he has been pretty cagey, telling colleagues that the push for change is being driven by the backbench, not by him, although he also has not ruled out putting his hand up should the time come. 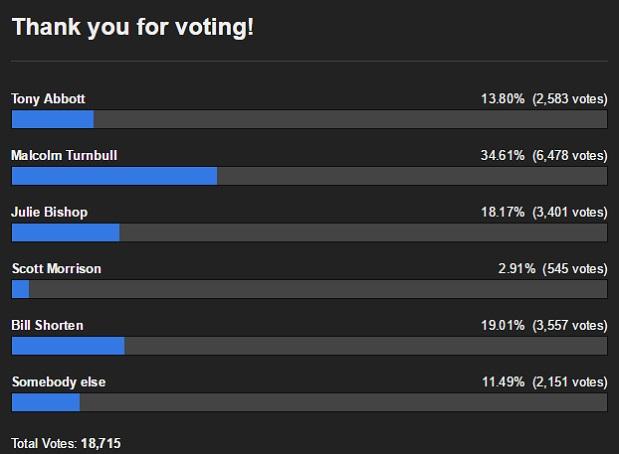 Does Abbott still have support from within the party?

Yes, definitely. A spill would be embarrassing for the Liberals, especially considering how much shit they heaped upon Labor after the series of leadership spills of the Rudd-Gillard-Rudd era, and many would like to avoid it. Queensland MP Peter Dutton told 7.30 that he believes talk of a spill is nothing more than an attempt to “sabotage” the government, and that he wants half-term PM Abbott to have a fair go. Even Jensen, while saying he believes Abbott’s leadership to be over, has said that the spill is still a “hypothetical” at this point.

What does Abbott himself have to say about this?

He’s certainly on the ropes. Yesterday morning, he dodged questions about a leadership challenge on morning TV, and tried to sell Kochie on the idea that Australians don’t care about “insider Canberra stuff.”

So is there going to be a leadership spill?

We’ll probably have to wait until next week’s party room meeting to find out.

But I want to know NOW.

Until then, there’s always Twitter, where we all can go bathe in collective schadenfreude and share droll #LibSpill memes.