PEDESTRIAN.TV has obtained exclusive footage that shows a punter on a night out at The Star Sydney, in Pyrmont, being thrown to the ground by as many as five security guards in the early hours of Sunday, February 7, resulting in hospitalisation.

French national Julien*, a 32-year-old digital marketing specialist, was celebrating the return of his girlfriend from an O/S trip at live music bar Rock Lily when the incident occurred, and was so badly injured that he’s unable to work for the next 6 weeks while his right leg – broken in two places – heals.

Check out the video in full:

Speaking to P.TV, Julien alleges that he was accosted by the Star’s security after a disagreement over one of his party sipping from an open bottle of champagne turned ugly.

“My girlfriend and I were enjoying the night at a table inside Rock Lily when a group of friends showed up unexpectedly and sat down to join us. I said to one of my friends that he could help himself to some champagne we’d bought but the glassie had taken away our glasses, so he took a sip from the bottle – we didn’t know that wasn’t allowed.

“The bar guy came over, took the bottle out of his hand and placed it back on the table, which I thought was the end of it. But then a security guard came over and tried to remove my friend from the club. He was arguing with them but they were overreacting, so my friend asked me to film it.

“When I was nearly at the entrance [of Rock Lily], a guard came to me and said ‘Put your fucking phone away’, before slapping it out of my hand. My phone case had my ID in it, so I bent down to pick it up and was knocked to the ground with great force, which opened up my eyebrow. There was a lot of blood but I didn’t resist.

“They locked my left and right hands and escorted me through the casino to near the entrance. One minute after that, they tackled me to the floor and one of the guards shoved me very hard on my left side, and one guy put his knee on my leg and he broke my tibia and fibula – I have a double fracture on my right leg. I felt it break.”

Julien claims the guards tried to put him back on his feet to drag him out of the casino as he begged them to stop because of his leg, after which he passed out.

“I don’t remember what happened next. Outside I recall the paramedics asking me my name and what happened, but it’s all blurry. They cut my socks off to see what was up with my leg and they could see it was broken. I kept passing out, and could hear my girlfriend crying and screaming, she was really scared.” 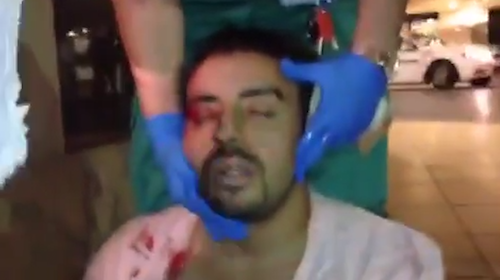 He was taken by ambulance to St Vincent’s Hospital, where he also received four stitches to his eyebrow.

His friend and fellow French national / Aussie resident, a 31-year-old salesman, witnessed the incident, recording the later parts of the assault and the aftermath on his iPhone.

He says he’s disgusted that Julien, who did nothing but attempt to film the guards’ aggressive behaviour towards him, copped such brutality.

“You can see in the video he wasn’t even resisting: there was four guys – one on the left, right, behind him – and one at his head. I started recording because everyone was on him.”

P.TV contacted NSW Police, who confirmed they were investigating the incident in a brief statement:

“Around 1:30am on Sunday, the 7th of February 2016, officers from Sydney City Local Area Command, attended a casino at Pyrmont following a report of an alleged assault.

A 32-year-old man later attended Day St police station around 10pm and formally reported the matter to police, who are investigating the incident.” 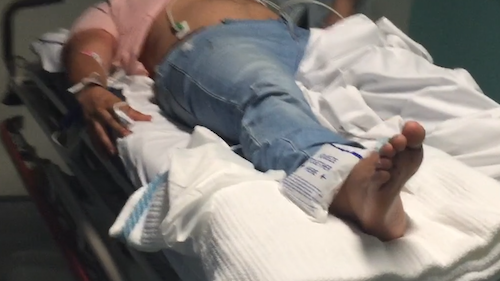 We also contacted the Star for a statement but were issued a legal letter threatening action if we published the footage.

A spokesperson also sent us the following via email:

“In respect of the information you presented to us, we believe there are some significant inaccuracies. However, please be assured, we take the security of all our guests extremely seriously.

The patrons involved in this incident were asked to leave due to their conduct but refused to comply with the request. We are currently reviewing the matter as we do all physical removals from the property.”

Julien has received legal advice, and advised us he *will* be taking the matter further, if only to stop this happening to anyone else.

“It’s just awful… I can’t work for six weeks, while my foot heals, I have to use stilts to get around. I can’t shower properly, I’m on a lot of morphine so I’m constipated. Even to take a shower it’s a nightmare. I’m in pain when I sleep.

I’m a good person and it’s so unfair that this happened for no reason. I said to the police ‘they did their job but they did it wrong’. I respect their jobs but try to explain to me how that sort of violence is acceptable?”

When asked if he’d ever return to The Star, Julien has only this to say:

“I’m a proud person so I won’t be going back in there again.”

* First names have been used at the request of those involved.