Recently, a campaign for consumers to buy brand name milk instead of the Coles and Woolworth‘s $1/litre variety in order to help struggling farmers has seriously taken off. And as excellent as this campaign is, it has led to a huge increase in demand for brand name milk, which the supermarket giants are struggling to meet. 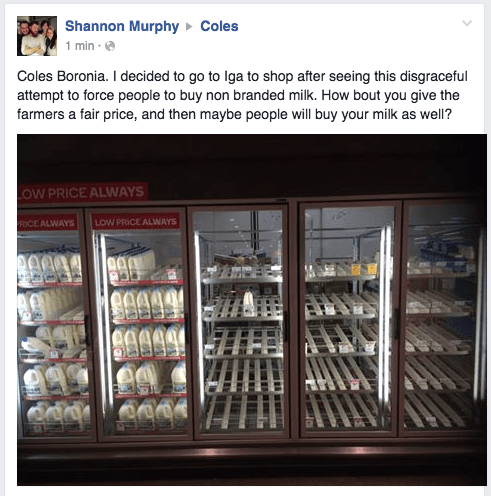 Amid accusations that they are actively making it more difficult for consumers to purchase brand name milk, Coles has hastily launched a consumer-driven milk fund to help Victorian and NSW dairy farmers.

Essentially, they’re launching a new brand of milk which will pay 20 cents per litre into the milk fund, a move that the Council of Small Business has slammed as hypocritical.

And as Mad As Hell elaborates, it’s a teeny, tiny, lil bit like pandering to the guilt-racked consumer while ignoring the actual problem.