Real talk: The set of ‘Thor: Ragnarok‘ looks like it’d be a hell of a good time.

It’s just a buncha muscly best buds hanging out in the glorious Queensland winter sun, intermittently making a movie where they bash various parts of the earth in.

There’s not a dang word in that sentence that doesn’t sound like good time, to be perfectly honest.

And it’s not just wild speculation. It one-hundred percent looks like they’re all having the best time hanging out together, if all the videos and photos from the set are anything to go by.

Take this, for example. Tom Hiddleston took out the UK TV Choice Award for Best Actor for his performance in the miniseries ‘The Night Manager.’

Obviously, being literally half the world away at the time, Hiddo couldn’t exactly show up in person to pick up the gong. So instead they sent it out to him, where he shot a short little acceptance speech thanking the awards for the honour.

Or, that would’ve been what happened, but then co-stars/men with giant arms and not enough sleeve to go around Chris Hemsworth and Idris Elba decided to pop in and accept the award on Tom’s behalf; Elba for his turn on ‘Luther,’ and our gr8 m8 Chris for his iconic, history-defining, game-changing role as Kim Hyde on the evergreen ‘Home & Away.’ 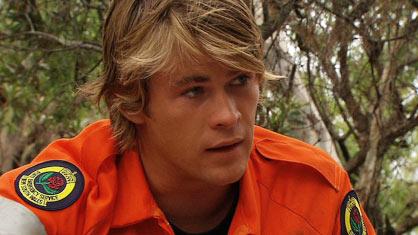 In my head, Hemmo, Ryan Kwanten, Isla Fisher, and Melissa George all get together and have little ‘H&A‘ lunches in LA whenever they’re all in town at the same time and it’s super fkn cute.