Other than that one weird kid you knew in high school who had a ponytail, a pet snake, and a huge collection of nunchucks, everybody hates spiders. Something deep in the dense, inner meat of our brains (I am not a doctor), instinctively reviles anything with more than four legs. We don’t trust them. What business do they have, having all those limbs? From mild discontent to actual arachnophobia, catching sight of a spider by surprise will evoke some negative emotion in any living human who hasn’t been so poisoned by contrarianism that they think gross things are cool.

Some of us are definitely more terrified of spiders than others, though. While I might immediately feel uneasy if I see a spider taking a pleasant wall-stroll through my living room, I have never had someone call emergency services on me because of the volume of my protestations at the existence of a spider.

In a tweet that has since been deleted, Western Australia‘s Wanneroo Police tweeted an incident report in which officers were called this morning to the scene of a man’s attempt to rid himself of the presence of a spider: 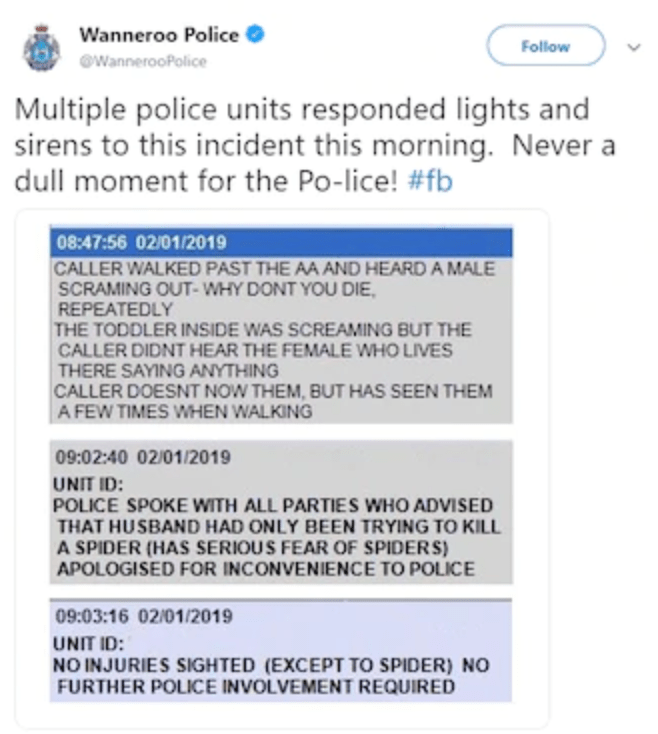 The report notes that no one was visibly injured (except the spider), that the man has as serious injury of spiders, and that he apologised for the inconvenience caused to the police.

This is not the first time in recent memory that something like this has happened in Australia, with a similar call and response being made in the Sydney suburb of Wollstonecraft in 2015.