WA Mum Puts Son In Blackface, Then Brags About Having The “Balls” To Do It

God… just… I mean… god fucking damn it. For shit’s sake, here we go again with this should-be-a-no-brainer crap.

Not only has a Perth mother gone right ahead and decided painting her own child in blackface was an OK thing to do, she has then subsequently bragged about it as her “QUEENING” moment on a prominent Facebook Mummy blogger’s fan page.

The post, made on Constance Hall‘s public Facebook page and has since been deleted, shows the Mother’s young son dressed as his favourite football player, Nic Naitanui of the West Coast Eagles, complete with head-to-toe brown paint.

The innocence of the kid’s intent is fairly obvious (it was book week at his school, and he wanted to dress as his hero). But it’s the bragging from the mother that really boggles the mind.

Despite acknowledging that she had countless people tell her it was a bad idea, and admitting that she had trepidations about doing it, the completely unashamed woman stated that she then “grew a set of balls,” painted the otherwise unknowing child in the VERY, VERY RACIST blackface, remarked that he looked “fanfuckingtastic,” and celebrated with “a wine before 12pm” after the kid’s school apparently, and inexplicably, awarded him ‘best dressed.’

It’s a masterpiece of ignorance on a Dickensian-level. A truly and utterly baffling paragraph in every sense of the word. 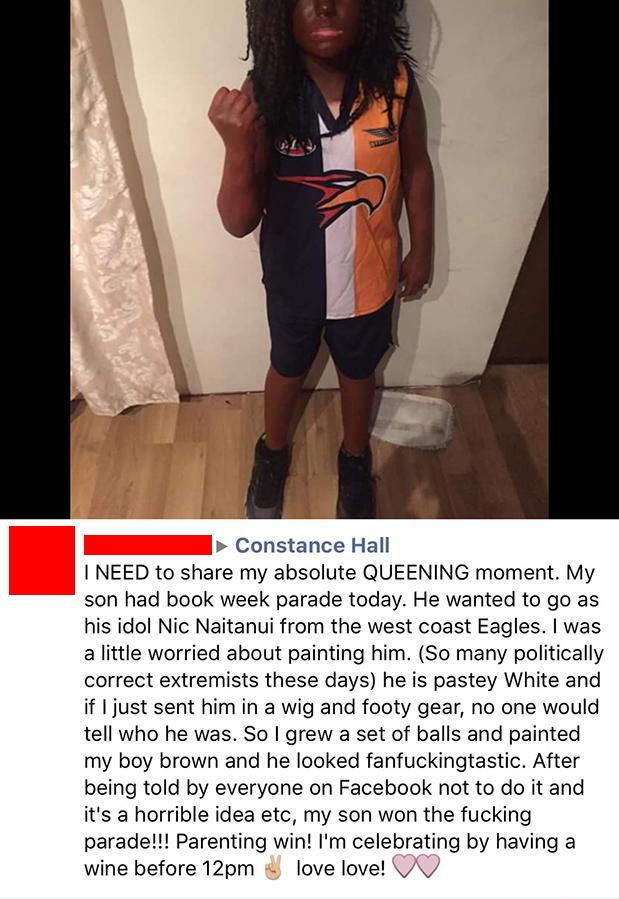 That paragraph again, for those who simply refused to believe it the first time you read it:

“I NEED to share my absolute QUEENING moment. My son had book week parade today. He wanted to go as his idol Nic Naitanui from the west coast Eagles. I was a little worried about painting him. (So many politically correct extremists these days) he is pastey [sic] White and if I just sent him in a wig and footy gear, no one would tell who he was. So I grew a set of balls and painted my boy brown and he looked fanfuckingtastic. After being told by everyone on Facebook not to do it and it’s a horrible idea etc, my son won the fucking parade!!! Parenting win! I’m celebrating by having a wine before 12pm. love love!”

Yes. Because it’s the brown skin that sets Nic Naitanui apart from all those other West Coast Eagles players with very distinctive dreadlocks and the number 9 on their backs.

The post was swiftly taken down, but not before people leapt to the woman’s defence, citing the movie ‘White Chicks‘ as the reason why this sort of thing should be ok.

ATTN WHITE PEOPLE: WHITE CHICKS IS NOT A DEFENCE.

For what feels like the billionth time, say it with me, y’all:

THERE ARE NO EXCEPTIONS TO THIS RULE. EVER.

NO, IT’S NOT OK IF YOU’RE DRESSING AS A FAMOUS PERSON.

NO, IT’S DEFINITELY NOT OK IF YOU’RE PAINTING UP YOUR OWN CHILD.