Who said politics isn’t fun? Everyone. Because it isn’t. It’s a nightmare hellscape of subterfuge, disappointment and bad soundbites. But occasionally it is stupid to the point of being funny, which is almost the same as being fun.

Republican councilman Lan Diep attempted (whether he succeeded is up to you) to inject some mirth into the political realm on Tuesday by girding himself with a very schmick replica of Captain America‘s shield while taking what I’m sure is a very solemn and serious oath of office. 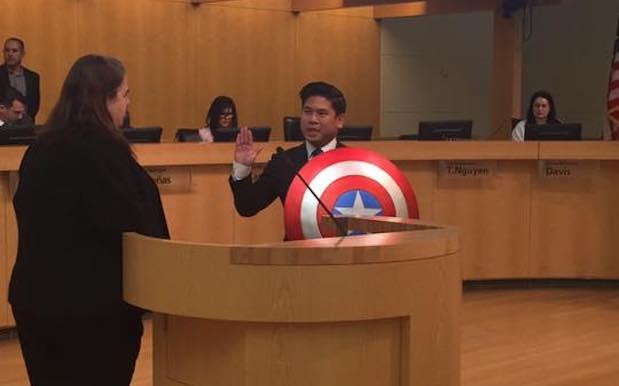 Diep, 32, who has now entered the City Council of San Jose, California, told the ‘Huffington Post‘ he’s happy to dick around (paraphrased) if it gets people to pay attention:

“I believe government can be fun and I’m not above creating a bit of spectacle if it helps people pay more attention to local government. I’m willing to entertain them if they sit through all the policy discussions.”

He said there was “no metaphor” intended, but then went on to explain the metaphorical significance of the shield:

“Except that it represents America’s ideals and I do hope to aspire to those ideals of fair play, equal justice, and democracy during my term. But really, I just had this awesome shield and I wanted a chance to show it off.”

I am forced to admit that the shield, which I suspect is not really made from indestructible vibranium, is pretty dope.