The mayor of the small US town of Clay, West Virginia, along with a prominent businesswoman from the area, have both been called to stand down from their positions after a Facebook post containing a racial slur about Michelle Obama went viral.

“It will be refreshing to have a classy, beautiful, dignified First Lady in the White House.

I’m tired of seeing a Ape in heels.” 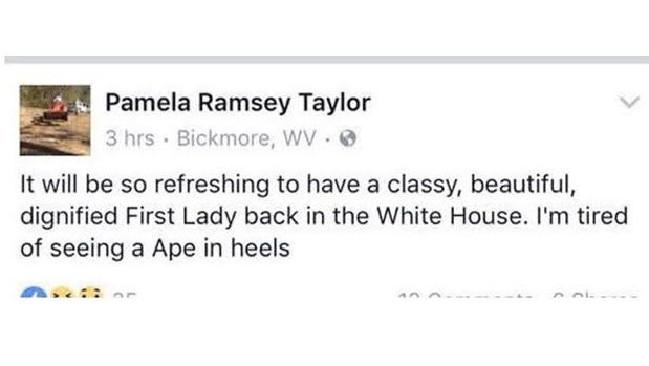 The Mayor of Clay, Beverly Whaling responded to the status, saying,

The post was shared hundreds of time before being deleted, but was screenshot and reported on by local media. It’s since gone viral, and a petition for the removal of both Whaley and Taylor has now amassed more than 43,000 signatures.

Whaling has since issued a non-apology of sorts to ABC 8 Eyewitness News regarding the incident, saying that her comment did not have racist intentions, so therefore she was not racist:

My comment was not intended to be racist at all. I was referring to my day being made for the change in the White House! I am truly sorry for any hard feeling this may have caused!

Those who know me, know that I am not in any way racist! Again, I would like to apologise for this getting out of hand!”

Clay Sheriff Garrett Samples says threats have since been made against the two women, plus some other county workers.

‘I didn’t intend it to be racist’ doesn’t mean what you just said isn’t racist. Your intentions don’t determine an incident of racism, your words and actions do.

Seriously, if someone says to you ‘Mate, that was a bit racist’, it takes far less energy to be like ‘Oh crap, you’re right hey. I’m sorry. I won’t say that again!’ than argue ’til you’re blue in the face about whatever intentions you may or may not have had.

Just apologise and learn from it, friends. It’s heaps easier, and it’s nicer, too.