Blink-182 drummer and Kardashian hubby Travis Barker was rushed to hospital in Los Angeles on Wednesday with his wife Kourtney Kardashian by his side. Both Kourtney and Travis have now broken their silence on the ordeal.

In a series of Instagram Stories posted on Sunday morning, the couple updated fans on the situation. 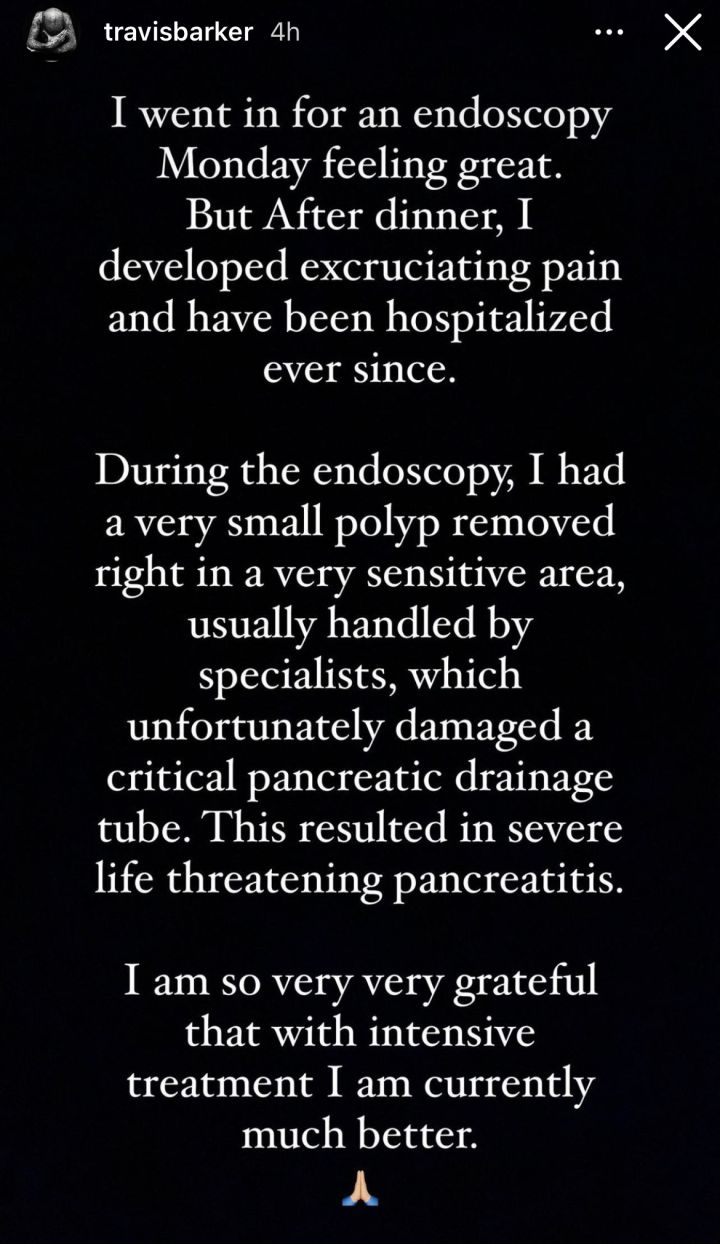 “I went in for an endoscopy Monday feeling great. But after dinner, I developed excruciating pain and have been hospitalized ever since,” Travis wrote.

“During the endoscopy, I had a very small polyp removed right in a very sensitive area, usually handled by specialists, which unfortunately damaged a critical pancreatic drainage tube.

“This resulted in severe life threatening pancreatitis. I am so very very grateful that with intensive treatment. I am currently much better.”

Kourtney later followed up with a Story of her own. 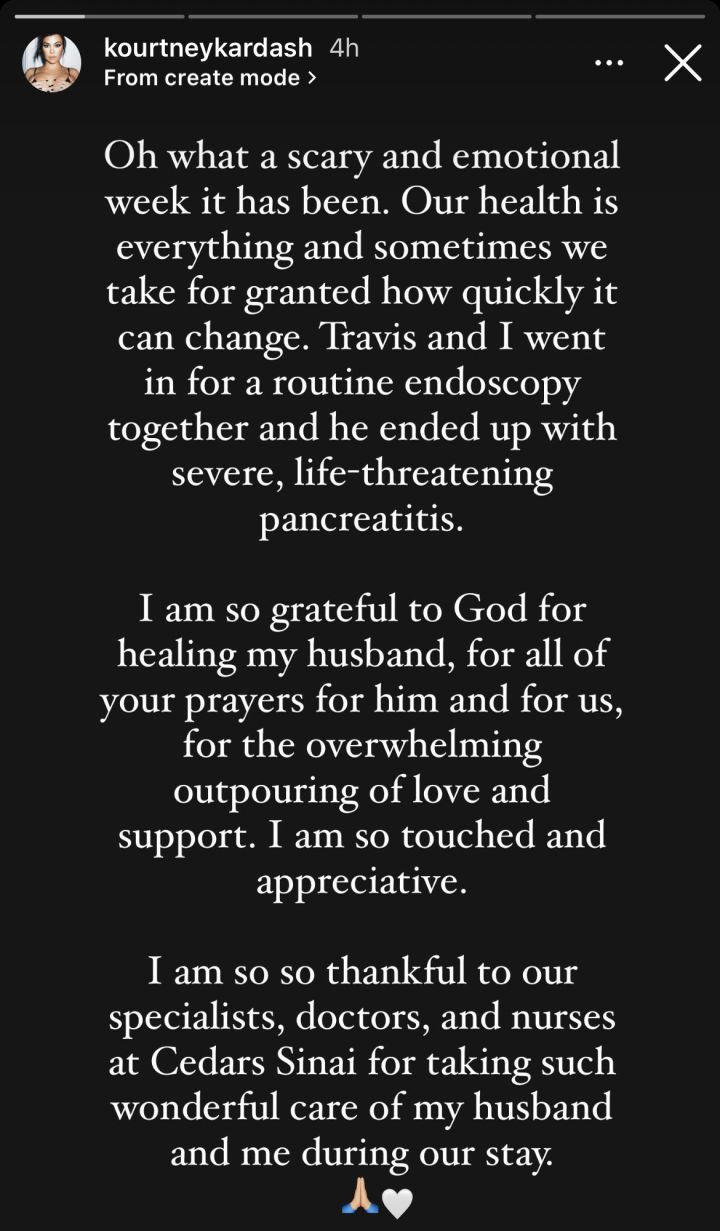 “Oh what a scary and emotional week it has been. Our health is everything and sometimes we take for granted how quickly it can change,” she wrote.

“Travis and I went in for a routine endoscopy together and he ended up with severe, life-threatening pancreatitis. I am so grateful to God for healing my husband, for all of your prayers for him and for us, for the overwhelming outpouring of love and support.”

“I am so touched and appreciative. I am so so thankful to our specialists, doctors, and nurses at Cedars Sinai for taking such wonderful care of my husband and me during our stay.”

According to reports and pics from TMZ, Barker first attended West Hills hospital on Wednesdat. From there, he was stretchered into an ambulance to be transferred to Cedars-Sinai Medical Center. TMZ speculated that this was because the West Hills team felt Barker needed “additional care”.

Multiple reports later emerged since Barker’s hospitalisation that the 46-year-old is suffering from pancreatitis. TMZ claims that the condition — characterised as an inflammation of the pancreas — was brought on by a recent colonoscopy as confirmed in the couple’s Insta Stories.

Entertainment Tonight quoted its source as saying: “Travis was sick and had intense pain in his abdomen and it really concerned him and Kourtney. They called 911 and he was rushed to the hospital. After speaking with Travis and running several tests, doctors said Travis is suffering from pancreatitis.”

Photos of Travis Barker being loaded into the ambulance on Tuesday showed his hand raised into the air, his distinctive tattoos visible. His missus was shown walking alongside the stretcher in a black hoodie and track pants. ICYMI (and how could you, it was everywhere) Travis Barker and Kourtney Kardashian got hitched earlier this year in a massively extra ceremony in Italy.

At some point during this medical situation, Barker took to Twitter and shared the somewhat alarming “God save me”. This could have been a plea to do with his condition, but could also be a reference to his song with Machine Gun Kelly, which happens to be titled “God Save Me”.

After Barker’s tweet went up, his daughter Alabama Barker caused the plot to thicken by posting to her Instagram Story.

The 16-year-old shared the equally alarming: “Please send your prayers.”

She then took to TikTok where she seemingly posted from inside the hospital, once again asking for prayers.

At this point, it looks likely Travis Barker will make a full recovery. Praise be!