Considering what you’re about to read is coming from a bloke who once started an official statement with the sentence “What the housewives of Australia need to understand as they do the ironing…” or who once claimed that a woman’s virginity was the greatest gift she could ever give her husband, or who once tried to appeal to young voters on a reality show by claiming he was the one with “the not bad-looking daughters” or who once endorsed a Liberal political candidate by highlighting her “sex appeal,” we’re wagering you’re probably going to get a bemused chuckle or two out of it.

Prime Minister Tony Abbott went on breakfast TV this morning and responded to criticisms of his highly controversial Chief of Staff Peta Credlin that have reportedly been emanating from within his own party. There appear to be concerns from members of the Coalition that Credlin is too controlling, and the Prime Minister’s Office is far too rigid and overbearing when it comes to Governmental operations. Earlier this week, reports that the working relationship between Credlin and Foreign Minister Julie Bishop had completely broken down emerged, with the revelation that Bishop had gone around the PM’s Office to seek party approval to attend a UN Climate Conference in Lima, Peru.

Confronting the allegations head on, Tony Abbott appeared on ABC News Breakfast this morning and was confronted with a number of questions regarding Credlin and the situation.

His response? He actually played the sexism card.

Just in case you didn’t quite believe your own ears, he said the following real life thing with his actual talking voice.

“Do you really think my Chief of Staff would be under this kind of criticism if her name was P-E-T-E-R as opposed to P-E-T-A?“

And to that, we respond simply.

“I think it would be folly to expect that women will ever dominate or even approach equal representation in a large number of areas simply because their aptitudes, abilities and interests are different for physiological reasons.“ 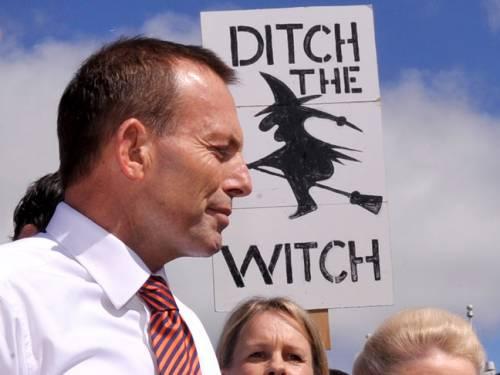 That’s your Federal Minister for Women hard at work, ladies and gentlemen.