Let’s rewind: On October 12th, one month and one day ago, Victoria was labouring under the tail end of its second coronavirus wave. The state had recorded 15 new cases of COVID-19 in the previous 24 hours, and Metro Melbourne was sitting on a rolling 14-day average of 9.9 new cases per day. Premier Dan Andrews‘ previously-announced roadmap stipulated new stages of eased restrictions when that average hit 5 cases and 0 cases respectively, but the tail was wagging, and public anxiety was high. It was at that point that Tim Smith, Liberal Party potato head, spoke.

Throughout the pandemic, Smith made a trademark out of making things as needlessly hard as he possibly could. His constant public agitation possessed a TAG Heuer-like consistency, facts and science be damned.

On the 12th, Smith capitalised on that public anxiety and launched yet-another feckless attack, politicising the daily case load in a thinly-veiled call for the economy to be re-opened immediately.

In a tweet, Smith leapt all over a report in The Age concerning comments from Chief Health Officer Brett Sutton where he would not comment on whether or not the 5-case-per-day average target was “achievable.” It should be noted that while Sutton is the state’s Chief Health Officer, he cannot see the future.

At that time, Tim Smith, the Liberal Party member for Kew in Melbourne’s inner east, stated that “the 5 cases 14 day average is a ridiculous and unreachable target,” and that the Andrews Government “must change these impossible targets, so we open up before Christmas!”

The 5 cases rolling 14 day average is a ridiculous and unreachable target that not even this Labor government now believes is attainable. They must change these impossible targets, so we open up before Christmas! pic.twitter.com/5ZmVd9M4ZL

It’s worth noting that despite posting the tweet on October 12, the report Smith cited was initially published by The Age on October 5th. At that point, Metro Melbourne’s 14-day average was 11.6.

So how did Timmy do there? How accurate was his aim? Let’s have a bit of a look at the figures that have been released since then, shall we?

On the day Tim Smith called a five-case rolling average “unreachable,” Victoria recorded its last “big” day of new COVID-19 cases. The 15 recorded on October 12th represents the last time the state recorded a total that high. In the 33 days that have followed, the state only recorded one other day of double-digit new cases. That occurred on October 13th. Since then, it hasn’t gone any higher than 7.

Stitching together the data published daily by the Victorian DHHS, we can see quite clearly that remaining case numbers virtually fell off a cliff almost immediately after Tim Smith said his big dumb thing. 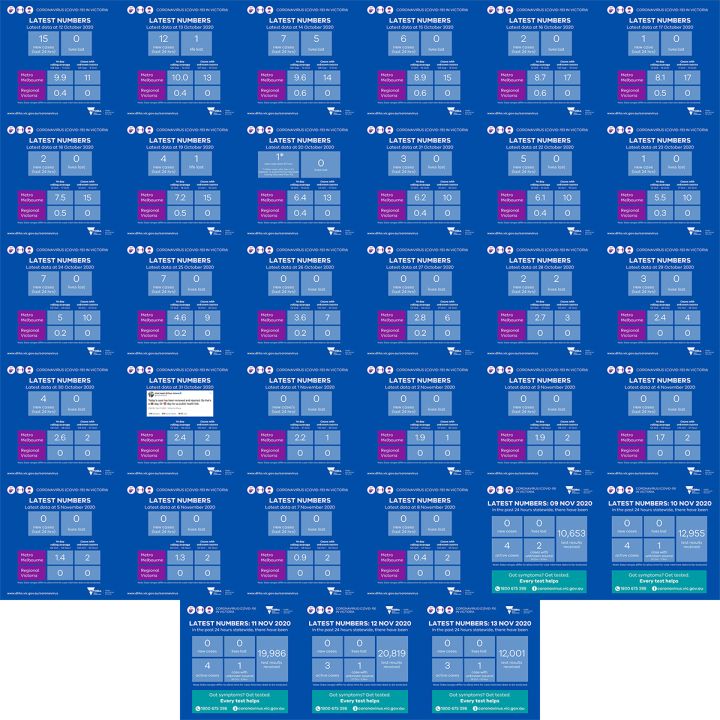 Metro Melbourne reached a rolling 14-day average of 5.0 new cases on October 24th, just 12 days after Tim Smith said such a thing was “ridiculous” and “unreachable.”

It took just 33 days for Tim Smith’s assertion that a five-case average was “unreachable” to not only be proven wrong, but blown completely out of the water.

To visualise just how spectacularly bung Tim Smith’s October 12 statement went, I have applied a timeline of events to the above data array, which you can view below. 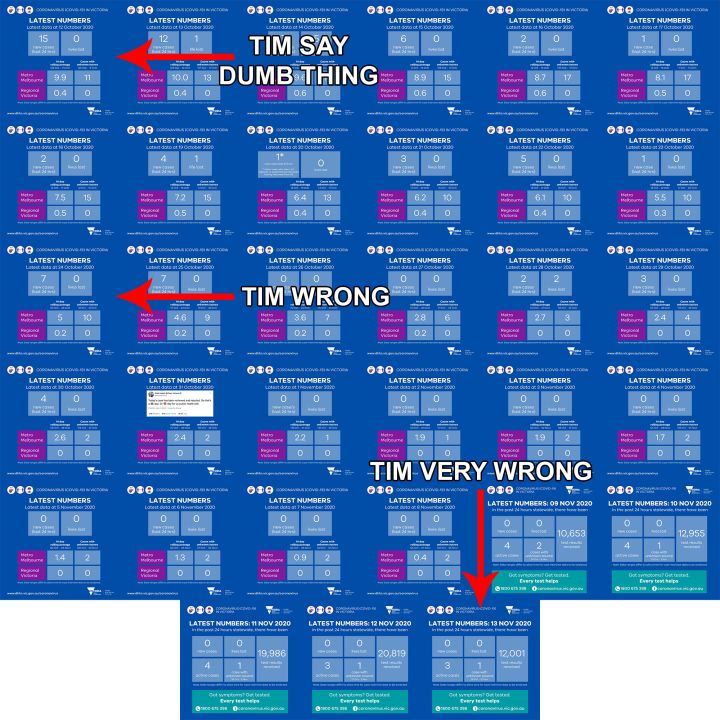 I cannot stress just how hard it is to be that wrong about something.

You’d have to dedicate significant time and effort to replicate being that much of a big wrong fuck.

There are scores of performers across the globe who spend untold amounts of cash to study under Gaulier in France who don’t wind up being half as big of a goddamned clown as Tim Smith has here.

It’s a remarkable feat of dipshittery, this sterling effort in being wrong. A self-own on an unfathomable public scale.

It should shock no one that Tim Smith has, on this fairly spectacular day for all Melburnians, not said a single word in public.

We should be so bloody lucky on every other day from here.