The Bondi man whose abusive messages to a woman he met on Tinder went viral has apologised, saying his behaviour was “absolutely inappropriate”.

Thomas McGuirk, 28 was fired from his job last week after the messages he sent Ebonie Sanderson, 26, went viral on Instagram.

McGuirk’s social media platforms were quickly deactivated, but in an exclusive interview with News.com.au, he said he was “extremely embarrassed” by his behaviour.

“I was angry and upset. There’s no excuse for it, I have been brought up with good values and I am so distraught that I let my ego get the better of me,” he told the publication.

He’d matched with Sanderson on both Tinder and Hinge last week. Sanderson told PEDESTRIAN.TV he was quite forward, imploring her to come to his house for sex, and turning nasty when she didn’t.

“He was like, ‘Who else are you sleeping with? Who else is over tonight? Why wouldn’t you come over?” she said.

She told him that she was sorry to have wasted his time, but that she wouldn’t be coming round.

“You did waste my time,” he said in a voice memo, which Sanderson published on her Instagram.

In another message, he told her she was “below him” in society, and that “the dysgenic like you are there to serve us”. 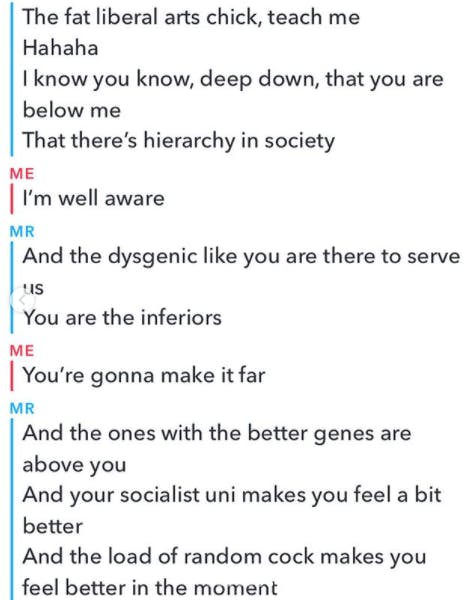 McGuirk told News.com.au he was a “good, decent person” who made a “huge mistake” and needs to learn from it.

However, Sanderson told P.TV that dozens of women had reached out to her with their own stories.

“About 30 women messaged me that they’d had encounters with him,” Sanderson said.

Already planning my next visit ????

She added: “I thought people would make me feel bad about sharing this, but all I did was share exactly what he said. It all falls on him.”

P.TV has reached out to Sanderson for her thoughts on McGuirk’s apology, but have not yet heard back.

Meanwhile, both Tinder and Hinge have booted McGuirk from their platforms, and News.com.au reports he is seeking professional help.

Anything to add? Get in touch: alex.bruce-smith@pedestriangroup.com.au.