Oi, how good is beef jerky? Pretty bloody good. And it’s even better when you can sit back, relax, and take solace in the fact that your jerky isn’t made by bigoted jerkholes.

Sydney jerky company Darling Jerky Co. recently had an unforeseen wave of activity on their Facebook page, stemming from a post from a woman called Lynne.

Lynne decided that, after binge-sharing a helluva lot of badly-designed infographics (with unsourced information and not-so-friendly opinions about Islam) she would head to random Aussie jerky pages and ask if they were Halal-certified. She was not too impressed with Darling Jerky’s response: 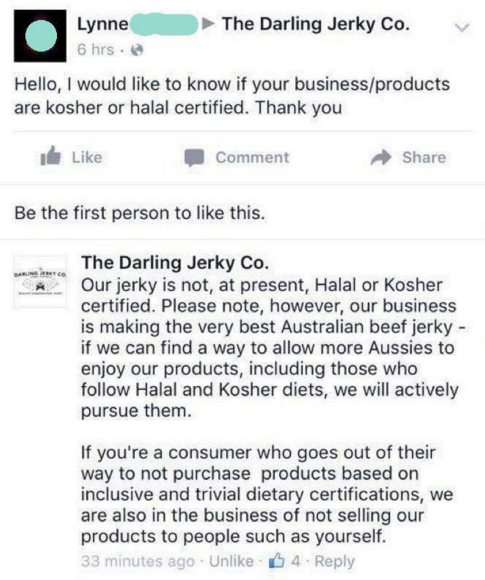 Since this answer, Darling Jerky Co. has been the target of those crazy anti-Halal groups. You know, the ones who take pride in hiding behind a crudely-constructed masquerade of “patriotism” or “animal rights” to be able to further marginalise a minority group:

This company doesn’t want your business if you are opposed to animal cruelty! The jerks at Darling jerky don’t want us…

They’ve been leaving 1-star reviews all over the shop, as well as continually writing on the company’s wall trying to re-explain their ‘I”m-not-bigoted-I’m-not-racist-I’m-just-a-patriot’ stance on Halal certification.

PEDESTRIAN.TV decided to have a chat to owner of Darling Jerky and mortal enemy of Lynne, Darrell Beveridge, who is valiantly standing his ground:

“I’ve had enough of the anti-Muslim sentiment in Australia under the guise of being Australian. It’s disgusting and if we lose a few customers that think this great country is a place of “us vs them” nonsense rhetoric then we don’t care, enough is enough.”

Quite a bit of activity on this page and a few people are wondering what’s going on.To summarise several days ago we…

Posted by The Darling Jerky Co. on Wednesday, 30 December 2015

We wanted to know, as an Aussie small business owner, how was the experience of being attacked by anti-Halal groups?

“It was a bit disheartening but at the end of the day the language, cadence and rhythm of the types of things that were said spoke for themselves. I don’t need to say anything incriminating against these people because they do a good job of it themselves.

I know our jerky is delicious so it doesn’t bother us as that’s all we aim to do.”

You may be slightly confused that a jerky company that DOES NOT ACTUALLY HAVE HALAL CERTIFICATION is being attacked by anti-Halal protestors – we are too. Darrell says he’s not going to immediately head out and get certified, but he’s keeping the option open as a real possibility:

“Our aim is not to aggressively become Halal certified, our aim is to keep it on our radar, and to not be bullied by anti-Halal bigots. Again, we’re all about the jerky and happy cows, and if this can be achieved with Halal-certified Aussie beef no worries!”

But don’t stress hey – Darling Jerky‘s sales have actually gone up since this whole debacle. When we asked how much, Darrell told us laughingly, “enough to keep me from watching the cricket tonight!”

If you’d like to add to this spike in DJC sales and order some bigotry-free jerky, you can at darlingjerky.com.