We are going through a strange time. A crashing economy thanks to Miss Rona has left many out of work, or at least working from home. We’ve become a little bored and I’m starting to miss going to work (I didn’t think I’d live to see that day).

It’s time for action. I decided to ask my friends, family and co workers to remind me of the shit times work has to offer. I asked for their most embarrassing work stories to make me thankful to the lord I am working from home. I hope this helps you too.

I’ll start with my own.

“At McDonalds, there are cameras that look right into the cars coming through the Drive Thru (and for good reason, safety). Anyway, whenever someone saw something funny or weird in someones car, all the staff would come over and have a laugh together about it. One time I could hear everyone in hysterics. I ran over to the security camera.
It was my dad, dressed in his underwear only , feeding my dog a Big Mac.” – Vanna

“One night I was doing a job trial in a nursing home. At night you collect all the patients teeth and put them in cups of Steradent, but that just wasn’t doing enough to clean em up. I decided I was gonna clean all the fucking teeth till they shined proper. I put them all in a big sink and started cleaning and then realised I didn’t know whose teeth belonged to who. Never did get a call back from that place.” – Jacqui

“I was having a trial at Harry’s Cafe De Wheels (the pie place) and the boss kept yelling at me IT’S CALLED FAST FOOD FOR A REASON. I didn’t get a call back.” – Jarvis

“My work mate (Landscaper) was too shy to ask our client if he could use their bathroom, so he shat in a bucket in the work van. That was pretty embarrassing for him.” – Dan

I’m going to pop another of my own embarrassing work stories in because my life is a mess.

“I asked a person with an amputated arm if he “Needed a hand” at the accessories wall at Apple. He gave me a good stare down.”  – Vanna

“My sister thought it would be funny to let off a fart bomb at my register when I worked at Oporto.” – Chantelle

“My first full time job was in a call centre doing tech support over the phone for a pretty well-known electronics brand. It was hell, but I managed to find a way better job with wayyy better pay after about 10 months. On my last day I thought it would be funny to take a call with an English accent or something. It wasn’t funny then, nor is it funny now, I was just a strange idiot. Anyway, I answered the phone and said my name was Gerald in a thick cockney accent. I nailed it, my friends were laughing, but I failed to realise that I would need to carry out the rest of the call in character, which was much harder than simply rattling off a single line in a different voice. What followed was a good 10 minutes of tech support with a poor old lady who just wanted to watch TV. I broke character a couple of times and I think she knew, but bless her soul, she went along with it anyway. I’m still embarrassed about this whole thing, but at least I got her TV going.” – Matt

“I got the sack from a fish and chip shop for not peeling prawns fast enough. The boss said his five year old daughter can peel prawns faster than that. Embarrassing.” – Lee

“When I was 18 I’d just started working at a clothes store and on one of my first shifts I had let a lady into the change room. As I was walking away she said “well, are you coming in?” I didn’t know what to do and I awkwardly looked back at her and said “ahhh”, but then I realised she was talking to her kid who was standing behind the clothes rack

“At age 38 with 2 children I had to sit next to the boss for talking too much.” – Bianca

I asked my sort of godfather if he had any embarrassing work stories. 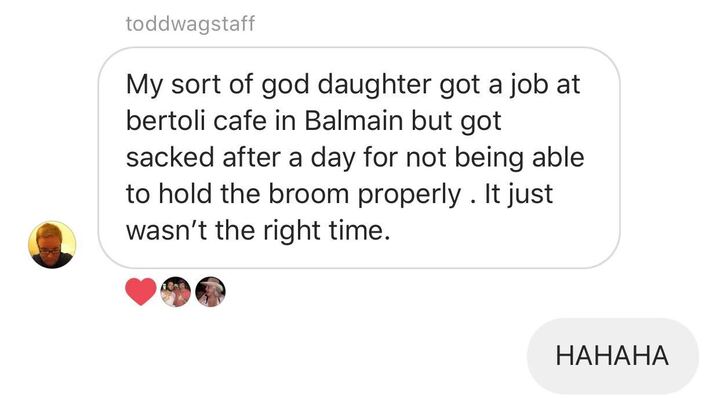 “I was showing off by keeping a soccer ball away from a few of my year 5 students. Doing sick tricks etc while they tried to tackle me. I got a little arrogant and tried to step on the ball and spin around, ended up slipping and doing a half back flip and smacking my head on the ground and needing to go to the med area to be checked for a concussion.” – Tim