Not even kidding, this is basically what a part of Melbourne looks like today. 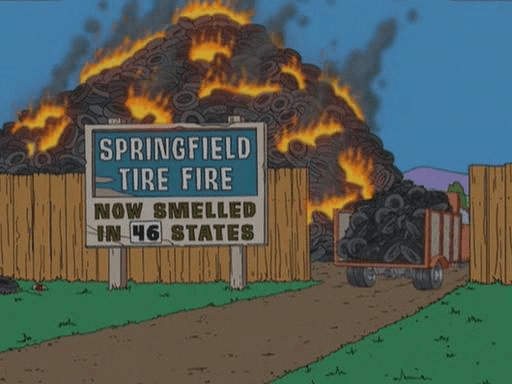 Firefighters in Melbourne have been battling to contain a freaking enormous blaze at a Tyre Yard in Broadmeadows, with the cause of the fire unknown at this stage.

The plumes of toxic smoke that have been billowing out across the city are so massive that the Metropolitan Fire Brigade has issued a Watch And Act alert for surrounding suburbs, urging residents to take shelter indoors and ensure all doors and windows are closed, with all heating and cooling systems turned off.

There’s around 50 firefighters currently on the scene battling the blaze, which is now so big that two fire-fighting Elvis helicopters have been called in to dump fire retardant on the site.

We’re not kidding. This thing is RIDICULOUS.

Wind has picked up as more @MFB_NEWS crews arrive.

The smoke plumes from the fire are visible across the city, even from as far back as Port Phillip Bay.

View of the #Broadmeadows fire from the @SpiritofTas posted on our Facebook page by Chris. pic.twitter.com/vtbmNNJe8P

“smoke on the yarra/#Broadmeadows” #nofilter #melbourne

Heat from the fire can apparently be felt up to 100 metres away.

Officials warn that the fire could potentially burn for “several hours,” and efforts to contain the blaze are being hampered by winds, and a potential water shortage in the area.

Now if we can just get a giant escalator that leads to nowhere built, we’ll really be in business.