If that isn’t every last one of you then you’re lying.

Here in Australia, we have more than our fair share of them – Mike Baird‘s socmed team tweeting out a draft of his #PrayForBrussels tweet, that time Cory Bernardi accidentally quoted a neo-Nazi pedophile and deleted his entire timeline in shame – but today’s story comes from our accident-prone pals over in the United States of America.

More specifically, it comes from the State Department‘s official travel Twitter handle, who’ve been tweeting our advice / warnings to college students about to spend a week on Spring Break inhaling keg beer and bad decisions.

Some of them are solid:

Spring break travelers – Wouldnt think about doing it in the US? Then dont do it when you are in another country #springbreakingbadly

Some of them contain good advice but are perhaps not worded effectively for their target audience:

Somebody offered you a free trip abroad, but the free luggage they offered is lined with cocaine. Beware of these scams #springbreakingbadly

And some of them are just out to tell American teens aged 17–22 that most of them are fuckin’ uggos. 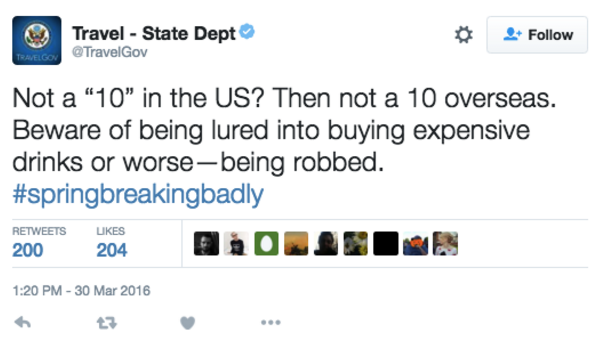 The internet’s responses were as swift as they were merciless:

State Dept: You’re ugly and nobody likes you. Trust no one. #springbreakingbadly

Are you hot enough to work at the state department? We’re hiring! #springbreakingbadly

@TimHerrera @TravelGov since when does the State Department neg its own citizens?

The nation-wide mocking wasn’t resigned to just the one tweet, however – it also had a go at that one about not accepting free trips in case they came with free blow.

Let he who has never been duped by a suitcase full of cocaine cast the first stone. #springbreakingbadly

You break your leg abroad, but the cast that the shady doctor put on you is made of cocaine. #springbreakingbadly https://t.co/KgYGvJMd65

Within hours a parody Twitter account was set up, and quite frankly, they’re doing the lord’s work.

Sadly, In the typical way these stories always end, the original tweet has already been deleted and an apology issues. C’est la vie.