If you’ve poked your head above the fold since yesterday, you’ve probably been keenly aware of the massive blowback from the Panama Papers, which was a huge leak of data from a Panamanian law firm and the resultant investigation by world media.

You might be scratching your head as to why it’s significant, or worth worrying about at all – besides, we know that rich people store and invest their assets into offshore accounts for a multitude of reasons (tax evasion, mostly). That much isn’t news. So why should we care about this one especially?

What the hell is it?

The Panama Papers, in brief, are the leak of 11.5 million documents from Panamanian law firm Mossack Fonseca, an exceptionally secret company that concern themselves with very high-level financial and corporate wizardry: forming shell companies, moving assets around the world, registering tax havens.

They were doing this kind of stuff on an industrial scale for a number of high-profile clients, many of whom were less savoury than your average enormous multinational company. They’ve registered over 200,000 companies, many of which are little more than a name and some assets, purely so money can be moved around the globe relatively frictionlessly.

The identity of the leaker isn’t known – obviously – but it’s clearly someone intimately connected with the company. And they’ve thrown the world into a bit of disarray.

Is this shit legal?

It is. Creating shell companies in tax haven jurisdictions, while quite possibly immoral according to which side of the political spectrum you find yourself on, is not a crime. Where it gets ickier is that the near total lack of transparency in these arrangements is a massive boon for criminals. If you’re committing crimes like, say, large-scale drug trafficking, you’ve probably got an arrangement like this to cover your tracks.

It turns out that Mossack Fonseca was providing services for clients who were involved – either directly or through proxies – in large-scale criminal activities, including drug kingpins, tax avoiders and Ponzi schemers. Whodathunk it?

So yes: it’s legal, in the sense that a dude who operates a service named Getaway Cars Inc is running a legal service. Many of the people using your getaway cars might be doing it for legal reasons for your reliability, promptness and subtlety, but it’s feasible that you might every now and then be operating in service of something, y’know, less legal.

Who got slammed for it?

Though lots of companies were pulled out into the open over this, the people really copping heat are the politicians and state actors caught up in it. You’ve probably seen the pretty massive protests in Iceland calling for the resignation of the Prime Minister, Sigmundur Gunnlaugsson. They’re pretty fired up about it, actually. 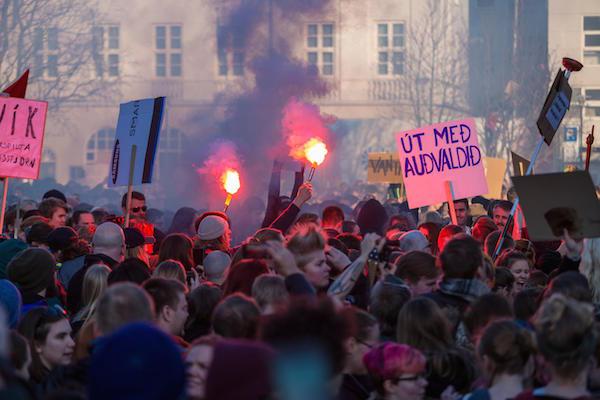 Basically, old mate Sigmundur (great name) used Mossack Fonseca as a middleman to conceal his undeclared investments in an offshore company. He sold his 50% stake to his wife for $1 eight months after he entered Iceland’s parliament, which is what we in the biz call ‘extremely not suspicious conduct at all’. He says he has no intention of resigning.

Why is this whole thing a big deal?

It remains to be seen just how hard this’ll hit:

a) the people involved, and;

b) the amount of legal scrutiny applied to those who use tax havens.

For their part, Mossack Fonseca reckon they’ve operated beyond reproach for 40 years and have never once been accused of criminal conduct.

So at least in terms of public perception, you could call this one a bloody big deal. As you’ve probably noticed, it’s been wall-to-wall coverage of this bad boy since day dot. But, by the same token, nobody was particularly surprised to learn the simple fact that rich people like to conceal their money using a wide variety of wild and wacky methods.

Let’s see how this bad boy plays out, shall we?