Bi-sexual, bi-racial, fine bi-me. THE OPEN PROJECT – a Pedestrian x Smirnoff Collaboration aspires to start a dialogue – ranging from newsy pieces to deeper-divers – about the issues worth talking about over the next 12 months. Why? ‘Cause life’s better when we’re open to new ideas, opportunities ’n experiences. To learn more, head over HERE.

Speaking to Fifi Box back in January, Nigella Lawson said “you cook for sustenance, and you also cook to make people feel welcome.”

It’s true. Food is the meaning of life, and those skilled enough to prepare our favourite meals are deities. Nigella isn’t known as the Domestic Goddess for any old reason. She brings people together.

So does Facebook. The company’s mission is to “give people the power to share and make the world more open and connected.” I reckon Zuckerberg would be pretty pleased with the emerging trend of FB communities that celebrate food. They’re open to anyone who wants to join – and here are seven of the best to get around right this second.

If you’re gonna expend the caloric and/or jaw energy to consume a burger, you wanna make sure that burger is god damn delicious.

The friendly folk of Fatties Burger Appreciation Society (FBAS for short) have made finding perfect, succulent bunned foodstuffs a little easier with their Facebook community.

Users are urged to rate burgers out of five pickles, which seems counterintuitive since everyone knows pickles are the devil’s nuts.

You can also snag a dealio here or there, with savvy marketers taking to the page to spriuk mouthwatering specials: 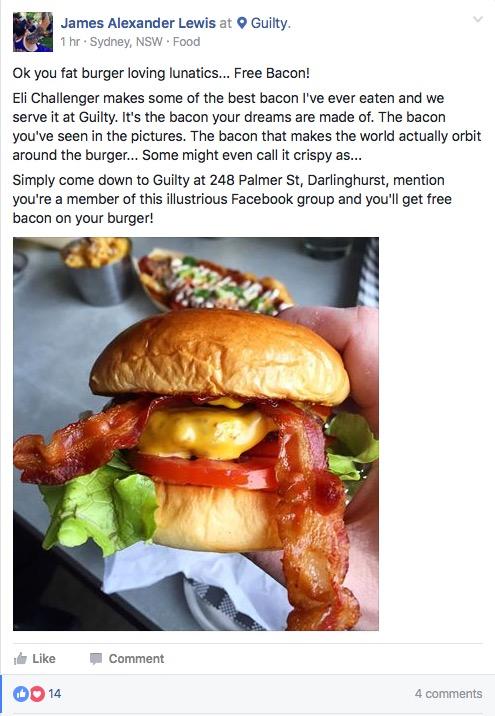 serious hard-on material this one

Not everyone is sold. PEDESTRIAN.TV‘s resident Burger Editor, James Hennessy, has mixed feelings. “I hate it because it ruins my feed but its a good way to find out about burgers, I guess.” Greasy.

FBAS also provides club members with a nifty Google Map pinpointing the locations of every tried and tested burger. Now that is dedication to the Sirloin.

The Halal Snack Pack Appreciation Society are arguably the fiercest and most loyal of them all. 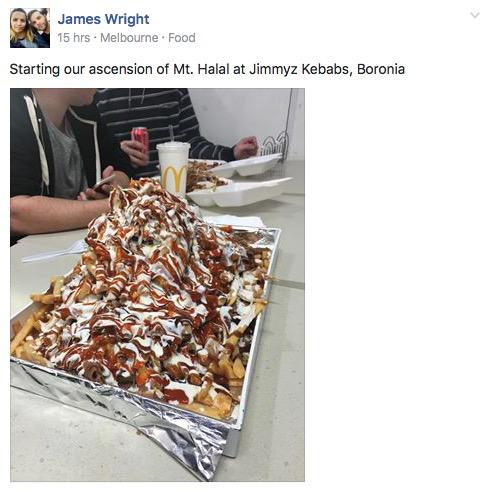 Celebrating the pure art form that is the HSP, the page brings together enthusiastic doner kebab meat-loving Australians from all walks of life. The New Daily have called it a “cultural revolution”, PileRats pointed out that CSIRO research reveals the “meat box” is the best late-night grub and even we’ve gotten a little wet over it in the past. 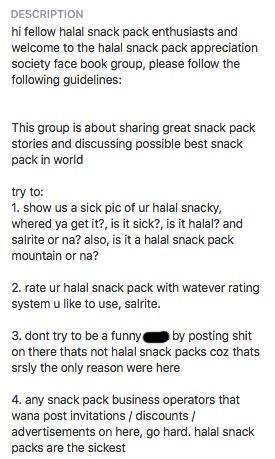 If you needed any more convincing that HSP is the best, Pauline Hanson hates them.

Even Cbus Super have hopped aboard the Halal train:

No longer the second rate side-piece to your spag bol, garlic bread is feeling the force of second coming, with thanks to Garlic Bread Memes.

Their purpose is simple:

Notable entries to the page include: 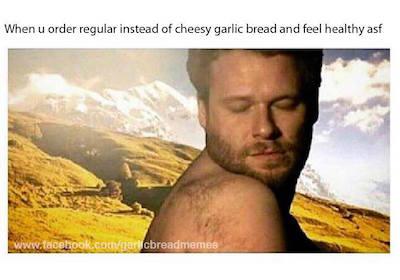 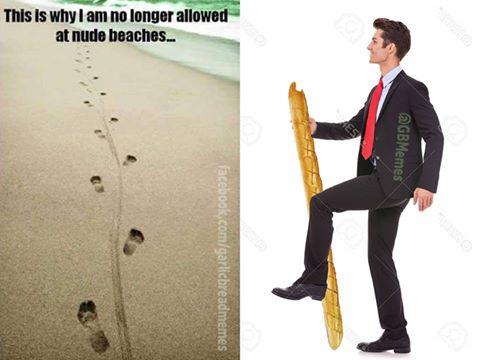 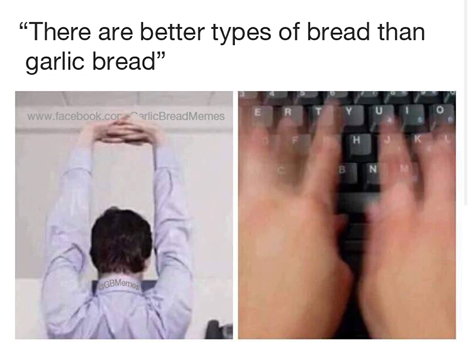 Boasting a 299k strong following, GBM is dedicated to championing the greatest bread of all, and denouncing the banana variety at every opportunity. They say nothing brings people together quite like a mutual dislike. 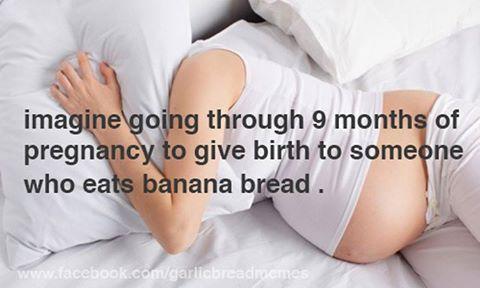 This is the group your Mother is most likely a member of. And why shouldn’t she be? Mums deserve to get in on the Facebook appreciation society craze, too. 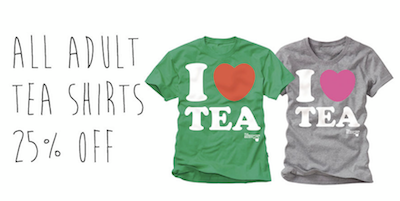 The Tea Appreciation Society is one of the most popular food-oriented communities on Facey, with a whopping 400k likes.

It’s as refreshing as a strong peppermint infusion, with naught an ironic meme in sight. This page is for people who just genuinely love a good Twinings. It’s a great place to find recommended tea paraphernalia and inane chat about temperatures for optimum distillation. It’s nice to see our elders coming together and joining in within the digital space.

The page also promotes their seperate online journal that also features in ‘Art’ and ‘Rock ‘n Roll’. An odd mix, but you do you, TAS.

Ok, so this one’s a person, not a group. But he’s too perfect not to include. Aaron Gocs is a legend with an insatiable love of chicken, milk and Hungry Jacks. He tours the country under the guise of ‘full-time comedian’, though it’s quite clear his life mission is to uncover which state boasts the greatest chicken scene via his Facebook page.

Gocsie typifies the great Aussie dream – to wash down all manner of food with a strawberry Big M while being a spit of 1995 Toadfish Rebecca. He has brought Australians from all walks of life into a community together with his passion, and for that we commend him.

Melbourne Avo Watch is trés niche. It’s listed by Facebook as a ‘support’ group, which is trés touching.

Comprising of just under 5k dedicated members, MAW’s mission statement reads “avocados are rly expensive, for some however, they are necessary. this is a group that keeps an eye on the prices of avos in melbourne and facilitates PSA when cheap avocados are spotted. pls note. avocado puns are highly appreciated.”

Avocado is widely known as being the MF greatest, as this page proves. 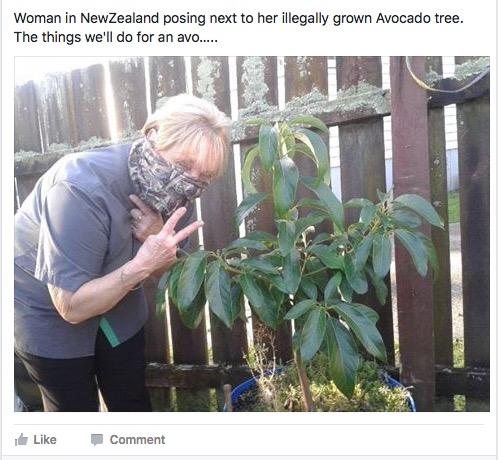 7-year-old King Curtis from Murica‘s 2009 season of Wife Swap put it perfectly when he said:

Upon investigation, the Chicken Nuggets Facebook page has clearly been overrun by a crap-posting virus, but that doesn’t stop hundreds of fans coming together and confessing their nug obsessions on the community’s wall:

So what are you waiting for? Get liking and feel the luuuuurve.