Turns out that getting on national TV as a poor person and expressing an opinion about taxation is a blessing and a curse. One the one hand, legions of well-meaning people donate in excess of $50,000 so you can buy a toaster. On the other hand, Australia’s lone national newspaper makes it its sole mission to ruin you.

The Australian‘s big yarn today, by Caroline Overington is that they located Q&A‘s tax cut question guy Duncan Storrar‘s son, Aztec Major. Major says that Storrar “doesn’t deserve” the money that was raised by the GoFundMe, because he’s “used drugs” and is “not the person he’s making himself out to be.” 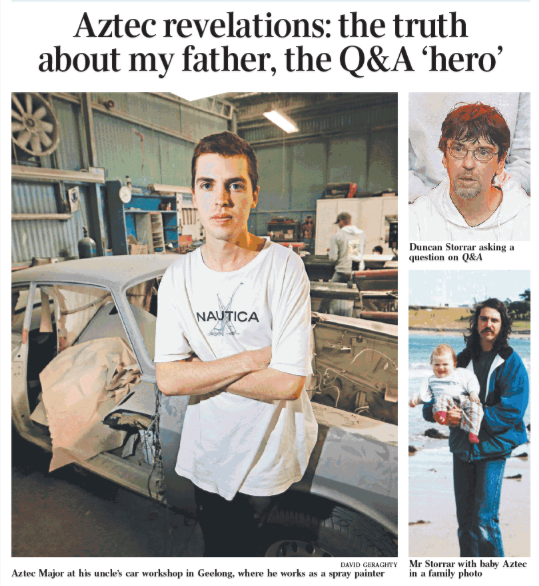 You can make the argument that donating an insane amount of cash to Storrar is at best a temporary panacea and doesn’t really solve problems of poverty or, more simply, an inequitable distribution of wealth. That’s a fair take. But the enormous effort taken by a national masthead to destroy him belies different motivations.

The brunt of the article is Major recalling that he and his father both used drugs together until he left that situation, and that he was a deadbeat father who wasn’t there for his kids. Because quite clearly, having a history of drug addiction means that you deserve a lifetime of poverty and struggle. Right?

Tim Lyons, the former assistant secretary of the Australian Council of Trade Unions, said on Twitter that this represents what happens in Australia if you’re “poor and imperfect”.

[“the demonstration effect”] If you’re poor & imperfect & express an opinion, you get the shit kicked out of you. pic.twitter.com/jePu3HZkQt

Whatever your take is on this Duncan from Q&A yarn – hey, you might think that donating heaps of cash to one dude isn’t really doing much to alleviate structural poverty, and that’s fine – it seems that newspapers doing their best to expose and ruin him because he said something they don’t like about tax is a bit fucked.