Hey, if a story catches on, for whatever reason, you certainly can’t blame anyone for hitching their cart to that particular runaway wagon and riding it out for as long as possible.

‘The Age‘ inadvertently uncovered pure, unabashed gold when a recent ‘Street Seen‘ vox pop stumbled upon the majesty that is Samuel Davide Hains; a man who is almost definitely stitching us all up, but is doing so in such a magnificently crafted way that it’s impossible to be anything but impressed.

The ensuing viral Twitter post set the internet on fire yesterday, leading to a second interview with the Kriss Kross-style backwards-dungaree wearing, Trotsky-in-leather daddy himself; this time with UK publication ‘The Independent.’

Whilst we all marvelled at this glorious creature and his turns-of-phrase so sharp they were practically hooks, the boffins at ‘The Age‘ scrambled to come up with a meaningful way to milk this particular yarn for all it’s worth.

The result? A front page that – in the middle of the most tightly contested, sickeningly close Federal Election count the nation’s seen perhaps ever – looks like this. 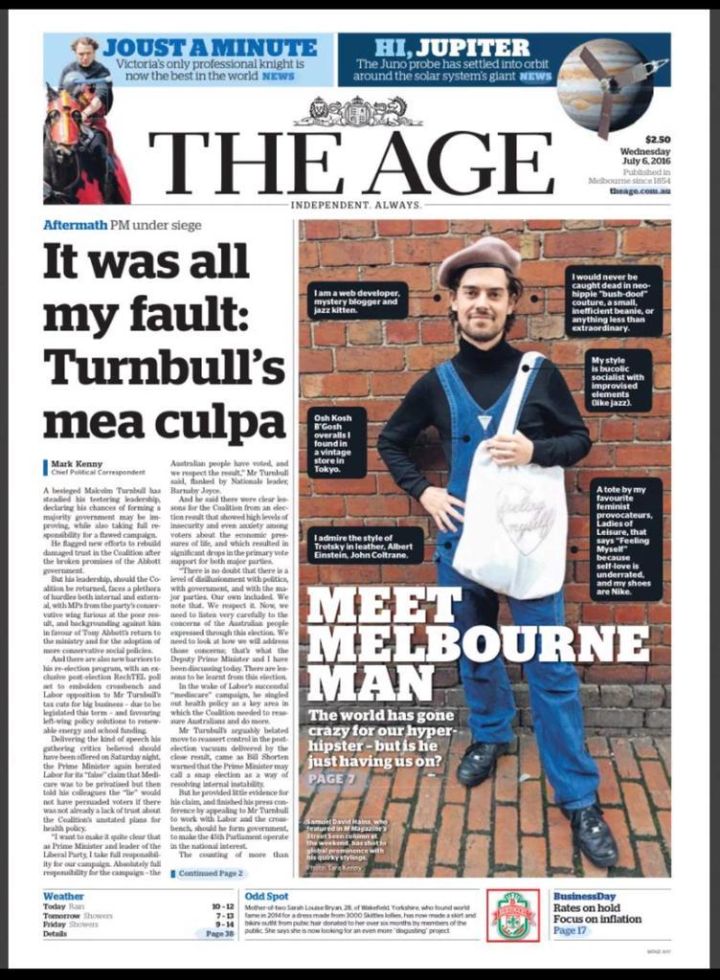 The horrendously thin “Melbourne Man” moniker aside, The Age appears to be at the very least entertaining the idea that this whole thing is a stupendously crafted rouse, noting in the accompanying article:

“Hains may be Melbourne’s latest hipster discovery, or he may be laughing into his turmeric latte right now. The brilliance of his interview is that it’s hard to sort fact from fantasy.”

“But in a week when Australia’s political fate is on a knife-edge, Hains may be the antihero the country, nay the world, needs.“

Welllllllllll. I wouldn’t go that far.

But I definitely would buy this man a beer.