CONTENT WARNING: This article deals with physical and verbal abuse. If you are being abused, or know someone who is, please call Lifeline on 13 11 14. If you are in immediate danger, call 000.

Bachelor star Tara Pavlovic has responded to allegations made by ex-boyfriend Sam Cochrane that she physically and verbally abused him during their relationship.

Pavlovic posted a selfie on her Instagram Story as she waited for a flight in Singapore.

In the lengthy caption, she pokes fun at Cochrane’s claim that her alcohol abuse led to the end of their relationship:

“On the waters can you bloody believe it! How good is that for an apparent alcoholic,” she writes.

“I am getting so many messages from women who have been through the same thing I recently went through. Thank you everyone for sharing your experiences with me and sending your love. I feel lucky that I was in a similar relationship when I was younger. So, after 6 months I was able to recognise the signs and walk away without guilt when he cried begging me back.”

“For any girls struggling in an emotionally abusive relationship, there is an article I read about dating a narcissist that really helped me understand what was going on,” she adds. “I’ve done a swipe up link for anyone who wants to read it. You’re not crazy. X”. 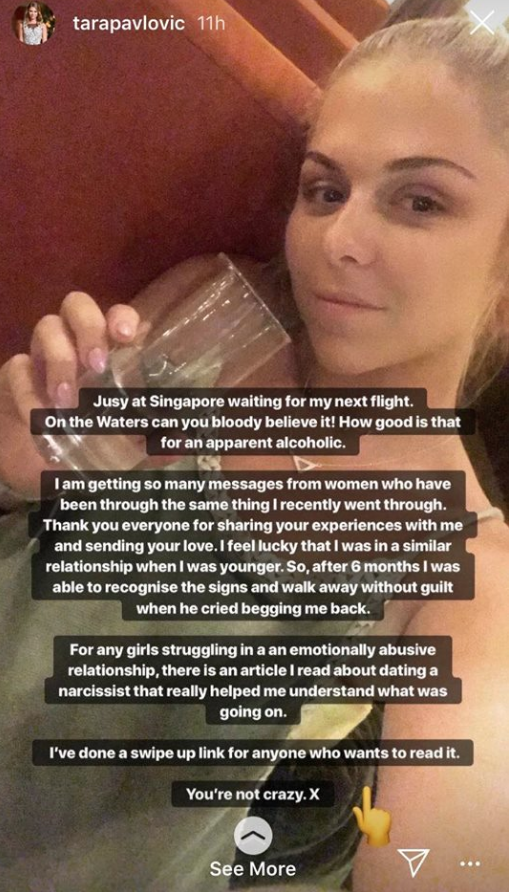 The link leads to an article by POPSUGAR Australia called 13 Signs You’re Dating a Narcissist.

Cochrane previously told Woman’s Day exclusively that Pavlovic’s excessive drinking as well as the physical and verbal abuse he allegedly endured led to the demise of their relationship.

“At weekends it was this binging thing and then it would be the put-downs and the verbal attacks,” he told Woman’s Day. “But the next day the Tara I really liked was back and she didn’t remember what she’d said, so we’d recover.”

He went on to recount a time when Tara was physically violent towards him.

“As soon as I walked in she punched me square in the face, twice. I managed to calm her down and we went to sleep but a pattern developed.”

But it was an argument after an event in Sydney that led to their relationship’s end.

“She bit my hand, my face and my back… I didn’t actually realise how bad it was until I saw myself in the bathroom mirror.”

You can read the full story in the current issue of Woman’s Day.

The interview comes after Tara spoke publicly to Daily Mail about their ‘toxic’ relationship, in which she said Sam would “[leave] me after a fight thinking I would beg for him back – he always threatened to leave and played games.”