As you might be aware, the review into Sydney‘s lockout laws, spearheaded by judge Ian Callinan, are in full swing, and a number of stakeholders are entering their submissions – including venues in the lockout zone that have been slugged by the changes.

One such venue is World Bar, a one-time hub for much of the activity in Kings Cross. Anyone who has been to World Bar over the past year or two can tell you that it ain’t what it used to be – a club that used to be standing room only on a Friday night now feels more like a breezy local pub on some weekends.

Well, they’ve formalised their concerns into a submission, and the figures are rough. The bar’s management estimates that revenues are down 25% in the two years since the laws were implemented. This comes largely from door charges after 1:30am – obviously, as no one is coming in after 1:30am.

This means that the venue has less money to cover musical acts and performances. World Bar says in the submission that only 2 bands will play on a Friday night, as opposed to the 6 they once supported.

They also included a table of the additional annual expenses incurred by lockouts legislation, totalling $224,900. 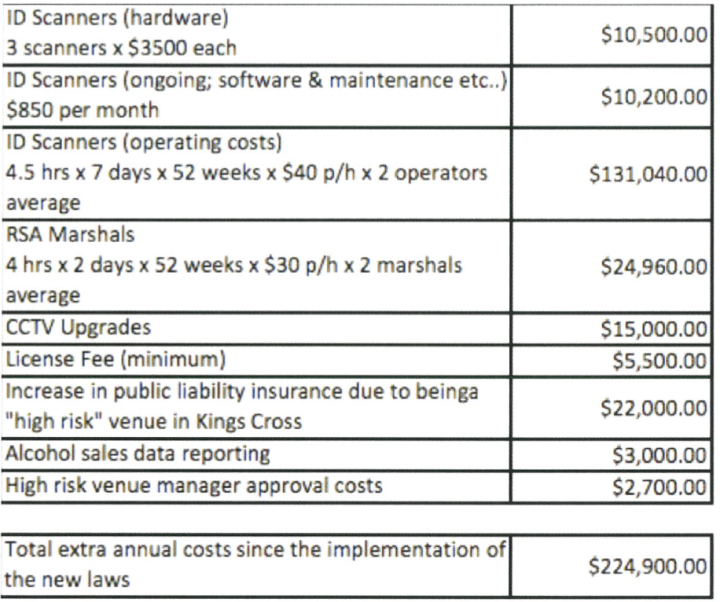 The venue’s management suggested a few measures that could be implemented to combat alcohol-fuelled violence.

If you’re swayed by the business case, then this submission is a pretty succinct summation of the problems clubs face in the lockout zone – that is, if all the classic venues closing isn’t reason enough.

“People don’t want to be forced into the casino,” the submission reads. “It’s a cultural wasteland designed only to empty your pockets.” You can read the full document HERE.