If ya’ll never got around the classic 2000s film ‘Blue Crush’, you probably clicked on this story assuming we’d finally completely cooked it in drawing comparisons between Kate Bosworth, actor, and a rescued drop bear. NOT SO.

See, they both share the very rare genetic condition known as the heterochromia, which causes reduced pigmentation in the iris i.e. different coloured eyes. 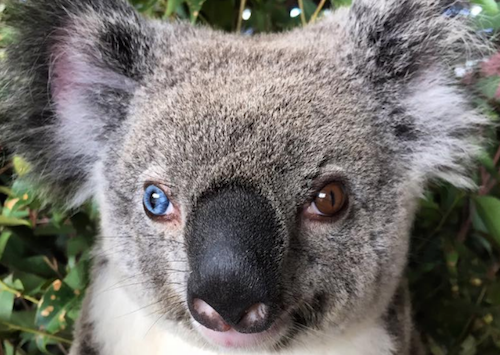 Australia Zoo shared a photo of the lil’ cutie pie to its Facebook page, with a bit of background about how she came to be in their care.

Named ‘Bowie’ by staff, she’s currently recuperating at the zoo’s Wildlife Hospital under the care of Wildlife Warriors following “a close call with a car”.

“Heterochromia is rare in koalas so naturally, we’re all mesmerised by her,” reads the post.

Zoo staff are hopeful that Bowie will eventually recover to the point where she be safely returned to the wild.

Until that day, MORE PICS PLEASE