South Australian police are hunting for a 43-year-old man after the “brutal” murder of a 54-year-old woman on Sunday night.

Police were called to a disturbance at a home on Albert Terrace at Murray Bridge around 8pm on Sunday night. Shortly after arrival, they found the body of the woman killed in the murder.

Police are now hunting for Travis Kirchner, 44, who they describe as being 176cm tall and weighing 81kg, of a slim build, with green eyes, and with short or balding brown hair with a possible rat tail “hanging out the back of his head”. He is know to police.

He’s believed to be wearing a faded red t-shirt and jeans, but no shoes, and has numerous tattoos, including a tiger on his chest and a panther on his upper right arm.

Police have released the following photo: 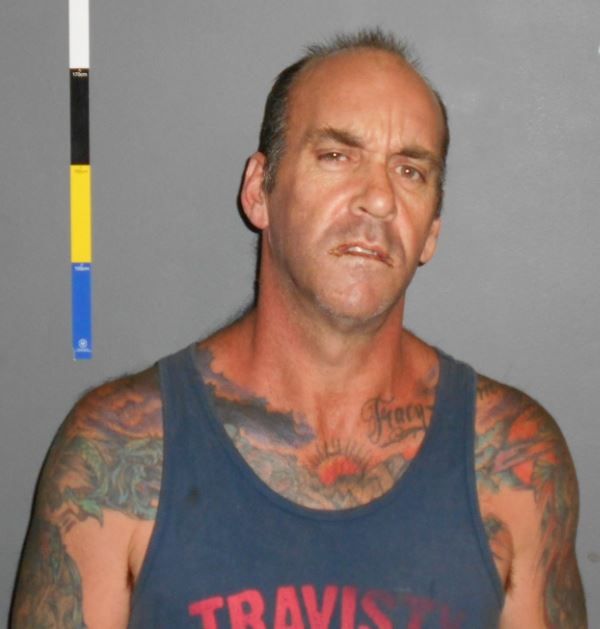 The head of Major Crime in South Australia, Detective Superintendent Des Bray, warned the public not to approach him, and to instead call the police immediately.

“The man obviously committed a brutal murder, a short time ago, within the last 24 hours, and is currently fleeing, and really, anybody in that situation is dangerous and shouldn’t be approached by anybody,” he told reporters.

At this early stage in the investigation, police believe Kirchner and the victim were known to each other, but do not believe it is a domestic situation.

“We urge him to come forward, make contact with police and surrender peacefully,” said police. “We also appeal to any family, friends or acquaintances of Travis to encourage him to surrender to police.”

Anyone with information is being urged to call Crime Stoppers.