A video shared to social media overnight has given a frightening insight into the smoke currently blanketing New South Wales, with a haze of grey stretching all the way to the horizon.

A Twitter used identified as James One shared the footage, which shows the view from an aeroplane window on a flight down the east coast.

“OK this freaked me out,” he wrote. “Just flew from Coffs Harbour to SYD and planet Earth was MIA for 500km of smoke (not clouds)! This is when the plane levelled out, couldn’t see any land!”

OK this freaked me out. Just flew from Coffs Harbour to SYD and planet Earth was MIA for 500km of smoke (not clouds)! This is when the plane levelled out, couldn't see any land! #Armageddon #bushfires #smoke #ClimateEmergency #auspol #innercitylunatic #climatechange pic.twitter.com/HB46QIqVB4

“It’s almost unimaginable the size of this thing,” he wrote about the dense grey cloud. “All along the East coast from South Queensland to Sydney, and inland to Armidale!”

A hazardous air quality warning has been issued for residents of Sydney and other parts of the east coast, as smoke from the blazes continues to spread. 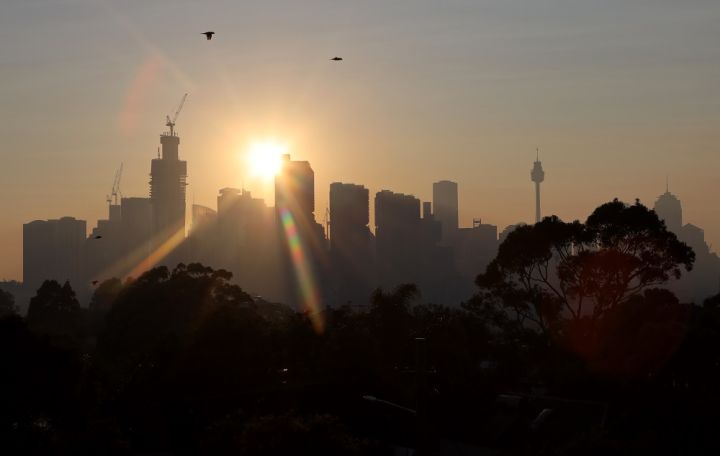 The above Associated Press photo shows the Sydney skyline is seen from Balmain earlier this morning, as winds blow smoke from bushfires over the CBD.

Residents of the Sydney and Hunter regions have been warned to “stay inside as much as possible” as smoke from the bushfires blows down the east coast, creating “hazardous” conditions.

Residents of south-east Queensland have also been urged to limit their time outdoors, with air quality in Brisbane and the Gold Coast currently rated “very unhealthy”.