This year when my loved ones asked me what I wanted for Christmas I told them I honestly didn’t want anything ‘coz I thought I already had everything I needed, but boy was I wrong.

A true Christmas miracle has occurred in Sydney as artist Scott Marsh has blessed the city with a mural calling out Scott Morrison’s lack of action amid the bushfire crisis.

The Chippendale artwork features the Prime Minister sporting a Santa hat and sipping a cocktail as flames surround him. 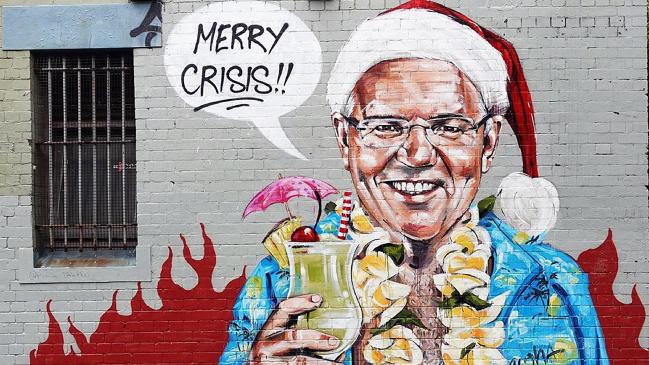 The Hawaiian attire is an obvious nod to his controversial trip to the tropical land as his country is being savaged by bushfires.

The artist called ScoMo out in a statement to the AAP.

“Heading out to Hawaii when the country is literally on fire is probably not a really great move in terms of leadership. I think public sentiment around that is all pretty unified,” Mr Marsh told the publication.

“I painted it all last night, took about three hours, woke up 5am this morning and finished it this afternoon – in time for Santa.”

Mr Morrison arrived back in Sydney on Saturday night and returned to work on Sunday, admitting he fucked up by jetting off on a lush vacay while Australia literally burned and no shit mate.

In response to the country’s fury over his blatant disregard for the state of things, Morrison simply said: “I apologise for that.”

Ugh. Aloha, mate. (Aloha as in goodbye, not hello).