Everything Scott Morrison does is deliberate. Everything he does is controlled. All the colloquial language in his national addresses, all the photos of the godawful curries he posts to Instagram, all the beers at the footy. It’s all in service of pushing the curated – and quite forced – image of ScoMo the Ordinary Dad; the idea that the Prime Minister of Australia is an ordinary, likeable, knockabout bloke. Seeing through that facade should be fairly easy, all things considered. Yet the Australian media’s breathless uptake of every committee-approved post on Morrison’s social media accounts defies that. And this brings us, ultimately, to the chicken coops.

Over the weekend, Morrison splashed several images across his social media accounts, carefully showing the supposed everyman constructing a chicken coop in his backyard.

The post contained a series of supposedly candid moments featuring Morrison at various key stages of the DIY project, and was accompanied by a caption featuring all of Morrison’s social media greatest hits. He referenced “Jen & the kids,” as he so frequently and deliberately has before, made allusions to important family time while positioning himself front-and-centre in the imagery, and tied the project back to politics in an affable, if not entirely roundabout, way. Even his clothing – off-the-rack Cronulla Sharks merchandise, as crisp as the day it was made – is classic Morrison self-promotion.

Jen and the girls have been keen for chickens for some time. The other night she finally just decided to order a chicken coop online. It was delivered yesterday and my weekend task today was decided. Next step is to get some chickens. They’re going to call it Lodge Ladies and name some of their chicks after former PM’s wives who lived at The Lodge.

And while PEDESTRIAN.TV was certainly not resistant to covering the story through a critical lens, local media fell over themselves to cover it without even the barest sniff of formal scrutiny.

This morning, Sunrise dedicated airtime to the photos, with only host Sam Armytage questioning whether Morrison had some construction help from his security team. David Koch immediately watered that down by asserting “ohhhhh,” “hang on,” and “what are you saying?” before asserting “well done ScoMo.” Mark Beretta then backed that up by chirping “what a legend.”

Prime Minister @ScottMorrisonMP has spent the weekend on the tools building a DIY chicken coop for his family. But @Sam_Armytage thinks he may have had some help… ???? pic.twitter.com/2WGvJvCqzn

Sunrise‘s social media team amplified the story on their Facebook page by stating the photos had turned Morrison into a “social media sensation.” 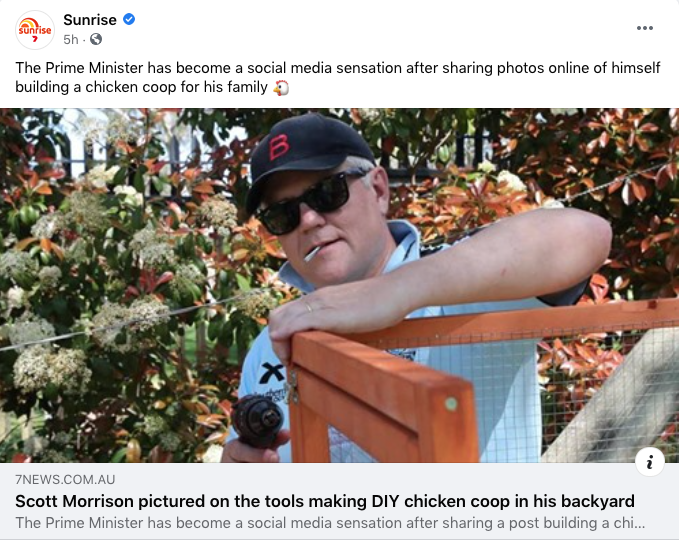 Over on The Today Show – broadcast by Nine, which wholly owns this publication – glossed over the photos in a somewhat more incredulous manner at the tail end of a segment on the upcoming Federal Budget. Though unlike Sunrise, the Today Show chose not to split that clip out by itself on social media. The conversation-in-question begins at 3 minutes and 10 seconds into the clip below.

"The reality is, yes the debt is going to be eye-watering… just getting to a casual $1.1 trillion." Anna Caldwell on the 2020 Federal Budget. #9Today pic.twitter.com/CNBxVWYAmL

In print and online, a cacophony of media outlets fell over themselves to uncritically cover the photos.

That article was republished across News Corp publications, including the Courier Mail which echoed the “Scomo Cam” line, while offering meek reference to online backlash. 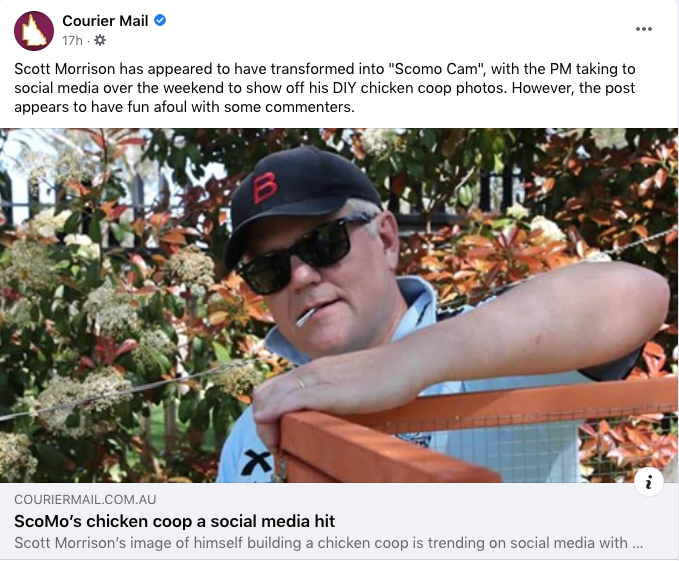 That half-baked attempt at balance disappeared on the NZ Herald, which syndicated that exact story across its platforms yesterday. 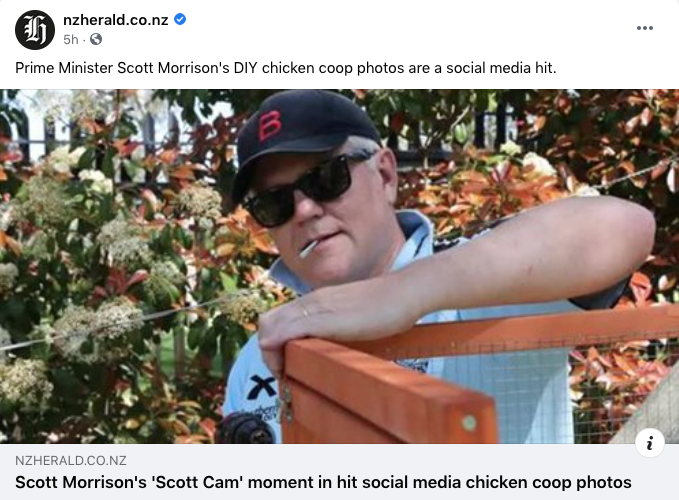 Elsewhere, the Daily Mail went with a pun to cover the story at face value, in an article that buried negative reaction away at the very bottom of the story.

The social media sell that the Daily Mail went with pushed the positive chicken coop coverage even further, asserting “ScoMo is a man of many talents.” 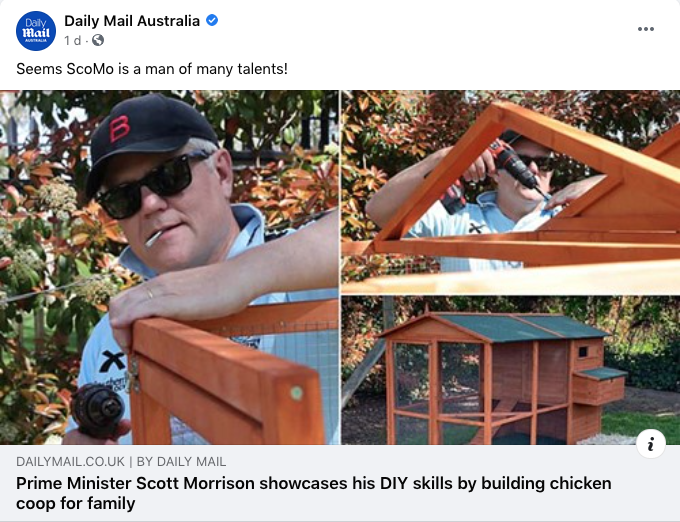 Channel 7’s online news platforms eschewed any of the negative reaction to cover the photos with the lightest touch imaginable.

9Honey – which, again, is published by Nine who also owns this website – amplified the aforementioned Today segment with a heavily SEO-geared web wrap that currently sits as the top story on Google. 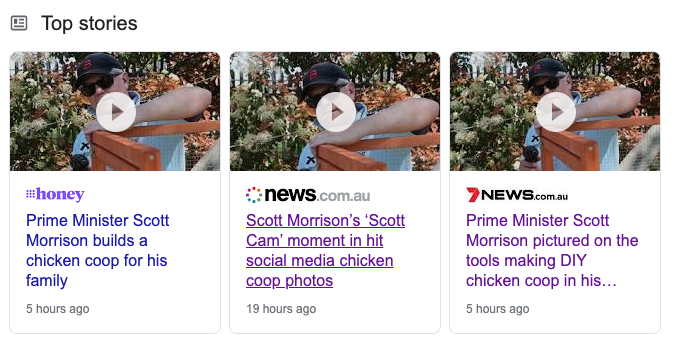 Not even the ABC was immune to biting on the story. Both ABC Sydney and ABC Perth pushed the images and Morrison’s words directly to social media, in arguably the most egregiously blind megaphoning of all. Both Facebook posts were deleted, but by no means was it a hasty decision.

So we now have @abcsydney & @abcperth running cute and cheesy little vignettes for Scott Morrison and his comms team.

Part of the whiteboard reinvention of Morrison was to continually show him as a family man, a tradie's bloke, next-door dad.

Make no mistake about it: Everything Scott Morrison does is deliberate. Everything he does has a purpose. And in a week where his Government is set to deliver what will likely be one of the more devastating Federal Budgets in recent memory, it’s absolutely no coincidence that this is happening now.

We’re getting ahead of the curve. We’re already deflecting. We’re providing alternative talking points to soak up valuable air time and print inches.

Morrison’s modus operandi has been this for years. Project and protect the image at all costs. Control the narrative so that it can’t control you. It’s remarkably effective; nothing can stick to a Government when its leader, the one who the buck ultimately stops with, is teflon.

Ordinarily, positioning a Prime Minister like that – and a Liberal Party one no less –  should be an excruciatingly hard job. But with a media class so happy to fall face-first across every crumb tossed out, it’s as easy as building a chicken coop.