Adelaide is currently enjoying the first leg Laneway Festival today, which we are sure has been a gorgeous sunshiney day of wonderfulness at Harts Mill in Port Adelaide.

Unfortunately, SA Police put a massive dampener on the day for many, by advertising some disappointing and dangerous views regarding sexual assault and alcohol intake.

They put up a post about a ecstasy bust which they believed was destined for Laneway. At the end of the post, they “reminded” patrons of the festival not to drink excessively, because it “can lead to someone becoming a victim of serious assault, including sex offences.”

A human being choosing to sexually assault someone is what leads to sexual assault. Rapists cause rape. The amount of drinks that the victim consumed is entirely irrelevant. It seems like a pretty simple concept, yet it hasn’t quite sunk in yet – even by the people who are supposed to protect us.

Followers of the SA Police News Facebook page were less than impressed, and the page has been deleting comments stating concern about the force’s stance on blaming victims: 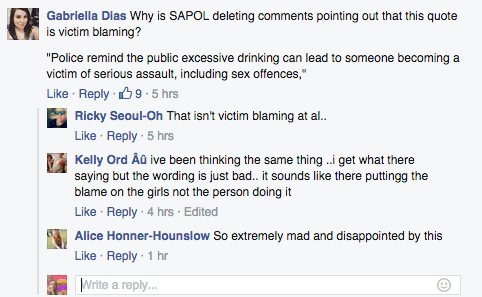