On July 4, 1971 – just a day after Doors frontman Jim Morrison was found dead at age 27 in his bathtub in Paris – a female western lowland gorilla was born in captivity at San Francisco Zoo. She was named Hanabi-ko – “fireworks child” in Japanese – because she was born on Independence Day. They called her ‘Koko’ for short.

Of the estimated 100,000 individuals left in the critically endangered western lowland gorilla population, up until her death last week, Koko was arguably the most famous. This is likely due to the fact that, unlike the rest of those gorillas, Koko could communicate relatively well using a form American Sign Language.

From the age of one, Koko was taught by Gorilla Foundation founder and then-undergraduate student Francine “Penny” Patterson a modified form of ASL that Patterson dubbed GSL (“Gorilla Sign Language”). There’s been a lot of debate about the extent to which Koko really understood language, but according to Patterson, by the end of her life Koko understood around 2,000 words of spoken English and could use around 1,000 signs.

Whether or not she was using ASL in a meaningful sense, giving her a large vocabulary to express herself afforded us some crazy insights into the mind of a gorilla that, by all appearances, had a pretty complex personality.

Take, for instance, her love of cats. In July 1984, Koko was given a kitten that she named ‘All Ball‘, after she told researchers that she wanted a cat for Christmas and became seemingly disappointed when she was presented with a toy one. In one famous incident, Koko was confronted by her handlers after ripping a sink out of a wall and blamed All Ball, signing “cat did it.” They only had a brief amount of time together before All Ball tragically escaped and was hit by a car, which, according to her handlers, devastated Koko. From an LA Times article from the time:

“When we told Koko, she acted like she didn’t hear us for about 10 minutes,” [researcher Ron Cohn] said. “Then she started whimpering–a distinct hooting sound that gorillas make when they are sad. We all started crying together.”

Koko then said, “Sleep. Cat.” by folding her hands and placing them at the side of her head, Cohn said.

Not just friends with cats, Koko also buddied up with a number of celebs. In 1999 she met Mr Rogers, whose show she had watched enough times that she immediately removed his shoes, as he did at the start of every episode. From a profile in Esquire:

He had just come back from visiting Koko, the gorilla who has learned—or who has been taught—American Sign Language. Koko watches television. Koko watches Mister Rogers’ Neighborhood, and when Mister Rogers, in his sweater and sneakers, entered the place where she lives, Koko immediately folded him in her long, black arms, as though he were a child, and then … “She took my shoes off, Tom,” Mister Rogers said.

In a video that is now sad for two reasons, you can see Koko hanging out with Robin Williams:

The Gorilla Foundation claimed that Koko mourned Robin Williams when he passed away 13 years after they met, although the accuracy of this has been disputed.

Koko was also something of a pioneer in terms of social media trends – nabbing a spot on the front cover of National Geographic in 1978 for a selfie she took in the mirror using a film camera. 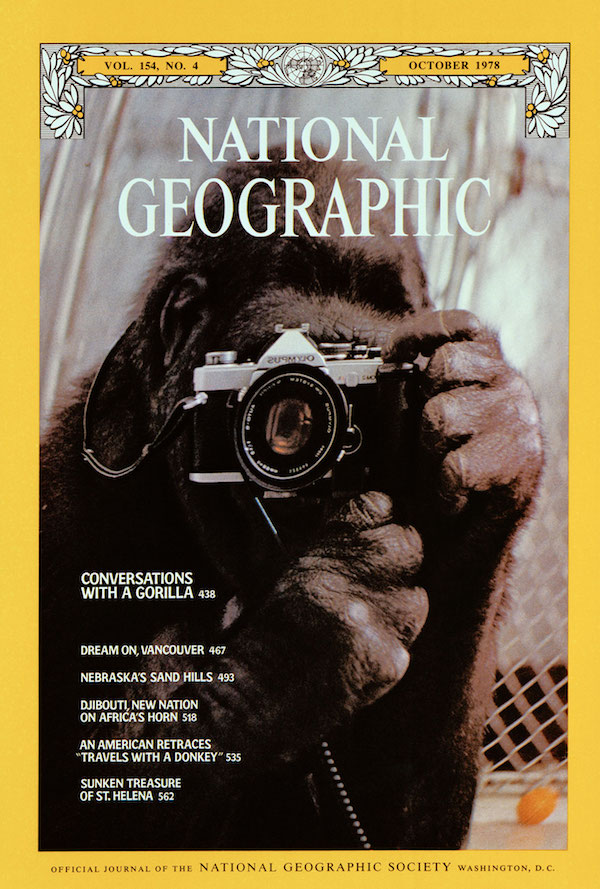 I’m honestly just blown away that she got the exposure and the focus right.

While nearly everything Koko said has been relayed through her trainers, making untangling it from their own interpretations nearly impossible, they reckon she had the capacity to lie, joke, speculate, and self-aggrandise – all traits we tend to think of as being the sole province of human beings.

In an interview Patterson did with The Atlantic, she brought up a few highlights, like how she started calling herself ‘queen’:

One of the first words that Koko used to describe herself was Queen. The gorilla was only a few years old when she first made the gesture—sweeping a paw diagonally across her chest as if tracing a royal sash.

“It was a sign we almost never used!” Koko’s head-caretaker Francine Patterson laughed. “Koko understands that she’s special because of all the attention she’s had from professors, and caregivers, and the media.”

Or her very eery apparent conceptualisation of death:

The caregiver showed Koko a skeleton and asked, “Is this alive or dead?” Koko signed, “Dead, draped.” “Draped” means “covered up.” Then the caregiver asked, “Where do animals go when they die?” Koko said, “A comfortable hole.” Then she gave a kiss goodbye.

In the 1978 National Geographic piece, Patterson told a story that she believed described Koko trading insults:

The dispute began when Koko was shown a poster of herself that had been used during a fund-raising benefit. Manipulating hands and fingers, Cathy had asked Koko, “What’s this?”

“Bird,” responded a bratty Koko, and things went downhill from there.

“Not me, you are bird,” rejoined Cathy, mindful that “bird” can be an insult in Koko’s lexicon.

“You nut,” replied Koko, resorting to another of her insults. (For Koko, “bird” and “nut” switch from descriptive to pejorative terms by changing the position in which the sign is made.)

According to the Gorilla Institute, Koko was also quite fond of using the word “toilet” as an insult.

Like most people who like to trade insults, Koko spent time online, participating in an AOL conversation that was billed as the “first ever interspecies chat” on Earth Day, 1998. As Salon notes, this chat provides at least one key insight into Koko’s personality – her nipple fetish:

PENNY: We’re going to be on the phone with a lot of people who are going to ask us questions…

PENNY: Koko, do you like to talk to people?

PENNY: She has vegetables for dinner … raw vegetables…

In the chat, Patterson explains that Koko uses ‘nipple’ as a sound-alike for ‘people’, except that’s not quite all of it – Koko was apparently obsessed with the nipples. In an odd attempt to meet the demand, Patterson wound up settling a sexual harassment case out of court. From Salon:

In 2005, Kendra Keller and Nancy Alperin, who had been employed by the Gorilla Foundation the previous year, took Patterson to court because, they alleged, “Patterson instructed Keller and Alperin to engage in the sexual act of removing their clothing to expose their breasts to Koko, in particular, their nipples.” The lawsuit alleged that in response to signing from Koko, Patterson pressured Keller and Alperin to flash the ape. “Oh, yes, Koko, Nancy has nipples. Nancy can show you her nipples,” Patterson reportedly said on one occasion. And on another: “Koko, you see my nipples all the time. You are probably bored with my nipples. You need to see new nipples. I will turn my back so Kendra can show you her nipples.”

Ultimately, the story of Koko is a somewhat murky one. Could she really talk or was she just copying the researchers? Was the experiment worthwhile or was it unethical to raise her like this? All we know for sure was that Koko kicked ass.