Punters Offered Partial Refund For Doomed NYE Party, Say Thanks No Thanks

The saga of Australia’s shittiest New Year’s Eve celebration just keeps on trundling along, affirming the decision of punters who chose to stay away from the NYE Above The Clouds event while continuing to mock the unlucky thousands who did attend.

In a statement that was emailed out this afternoon, Mothership Events apparently offered disgruntled attendees a $100 refund – that’s a full $300 short of a ticket’s face value. Responses to this oh-so-generous offer were totally predictable:

The organisers even took the ~totally legit~ method of conflict resolution by using Facebook messages to respond to prior refund requests. 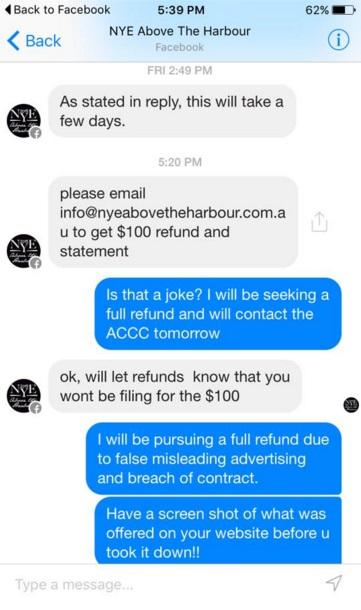 It’s also worth noting the emailed statement contains basically the same information as the publically available apology they stuck on the event’s Facebook page. The glaring difference, of course, is the mention of that partial refund. It’s not a giant leap to assume, just maybe, the organisers didn’t really want the public to catch wind of the refunds at all.

Oh, they also had the gall to tell people who waited three hours in line for grub to be patient.

While it’s just hearsay at the moment, chatter on both the official Facebook and the Refuse to be Ripped OFF- NYE Above The Harbour Scam page suggests that punters who accept the partial refund may find it difficult to push the organisers for more later. This one looks like it’s ending up in court, folks.