Protests As Travellers Detained At US Airports, Including 50 In Dallas

The new United States border policy restricting travel from Muslim-majority countries has caused confusion at US airports, with reports of dozens of travellers being detained, and crowds of protesters gathering in New York and Dallas.

A report from Dallas News claims that up to 50 people found themselves detained at Dallas Fort Worth Airport, including a Syrian couple who were travelling to the US to visit their sons, a Southern Methodist University student and graduate.

Protesters gathered at the airport in support of travellers caught up in the ban, which has seen some detained at the border in the US, and some in countries like Canada turned back before boarding flights.

People protest at Terminal D at DFW. Their grandmother from Sudan is being held inside. @dallasnewsphoto @dallasnews pic.twitter.com/PJuspAwniB

The Guardian report that, on the east coast, eleven travellers were detained at New York’s John F Kennedy Airport, and that there are reports of similar situations in Atlanta, Houston and Detroit.

Protesters also gathered at JFK, and there are reports from the US that the New York Taxi Worker Alliance has halted pickups at the airport in protest of the new laws. 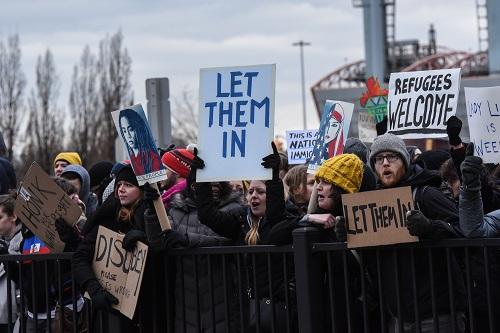 Becca Heller of the International Refugee Assistance Project told media: “We’ve gotten reports of people being detained all over the country … They’re literally pouring in by the minute.”

The rules for holders of US green card holders were initially unclear, and US officials have since clarified that residents from banned countries will need to check their status with US consulates.

At a news briefing on the new executive order, an official said that green card holders from these countries will have to be “cleared on a case by case basis”, and claimed that the process is working “expeditiously.”

Residents of Syria, Iran, Iraq, Libya, Somalia, Sudan, Syria and Yemen who hold US green cards and are travelling overseas will therefore need to seek consular assistance to find out if they can return.

Per reports in The Guardian, the US State Department says that those who have dual citizenship of a country on this list and any other non-US country are also subject to a 90-day travel ban. This presumably includes dual Australian citizens.

Current reports indicate that many of those detained, including the majority in Dallas, have since been released, and video shows a tearful reunion between members of a Syrian family at the Fort Worth airport.