Why Are Politicians So Obsessed With Trans People? We Investigate

Two political points centred in young people’s conversations right now are 1) the vile transphobia dominating news coverage and 2) how both Labor and Liberal actually agree on torturing refugees. But you may be surprised to know there’s a connection between these two topics. Transphobia and the anti-immigrant rhetoric spewed by our hateful government are linked — let’s dive into it, shall we?

We’re a month out from the election, the world is on fire, and politicians can’t shut up about borders and trans people? Like Mimi I’m left wondering… why you so obsessed (with this, with us, right now)?

[Editor’s note: the author suggests listening to “Obsessed” by Mariah Carey while reading this piece to get the full experience.]

Even those of us blessed to live under a rock have heard by now that Liberal candidate for Warringah Katherine Deves is incensed at the thought of trans women playing sports with their cis peers. So much so that she even compared it to the Holocaust in a conversation with Graham Linehan, the Brit who hates trans women so much it destroyed his marriage.

Yes, Katherine, this is just like when my grandfather’s village was pogrommed. But let’s move on, as she’s since apologised for the comment. What Deves hasn’t apologised for is how much she cares about the safety of women and girls. Of course, “women and girls” here being biological women and girls — a category that doesn’t clearly exist to the exclusion of trans women.

Scott Morrison weighed in and managed to defend his hand-picked Warringah candidate from cancellation and resurrect tired arguments with Albanese about boat turnbacks all in one day.

Beyond the obvious deflection, there’s a common thread here. These calculated political debates about gendered and national boundaries are both rooted in biological essentialism.

Biological essentialism, or bioessentialism for short, is the belief that categories like gender and race are pre-socially innate rather than a circumstance of upbringing or culture. Instead of thinking of race and gender as complex social formations which evolve differently across cultures and over time, bioessentialism says: these social categories are fixed, fundamental, and existed before humans even created them.

This is the shared logic that brings anti-trans feminists and other bigots in politics together. In the US and the UK, this looks like anti-trans feminist organisations working with evangelical, anti-abortion and far-right lobby groups to block trans rights legislations.

At home we’ve seen George Christensen use the antisemitic dogwhistle “cultural marxism” to describe the Safe Schools program during the plebiscite, One Nation’s failed anti-trans education bill in NSW, an amended national Religious Discrimination bill that still throws trans teachers to the wolves…

Now, Liberal party politicians claiming their anti-trans agendas stem from their care for the safety of women and girls.

Wait, the same Liberal party that’s been embroiled in countless sexual abuse allegations for more than a year now? That continues to deny four-year-old Tharnicaa the bridging visa that would allow her to return home to Biloela from community detention with her family?

As Greens leader Adam Bandt pointed out, it’s clear that the safety of women and girls is being used as a rhetorical tool here by a government that’s committed to abusing them, in no small part by implementing racist immigration policies which treat refugees from the global South as fundamentally different and dangerous, undeserving of an Australian life. 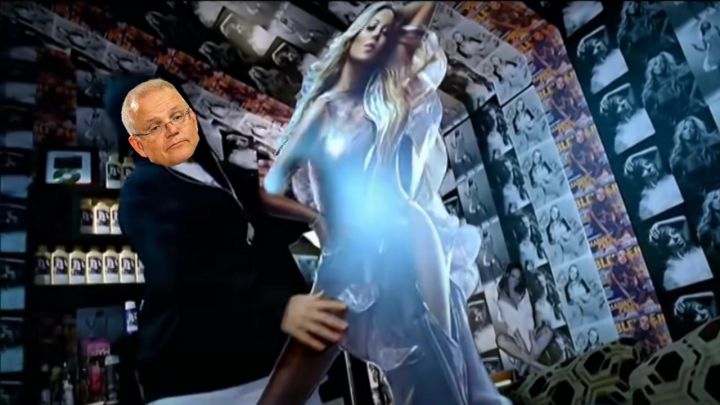 So why are they so obsessed?

“For this reactionary movement, the term “gender” attracts, condenses and electrifies a diverse set of social and economic anxieties […] When gender is figured as foreign invasion, [anti-trans] groups clearly reveal that they are in the business of nation building.”

It’s no coincidence that politicians are spreading panic over refugees crossing national borders by boat and trans women playing womens’ sports simultaneously; there’s a fixation here on the purity and stability of racial and gender hierarchies in Australia, and you can’t challenge one bioessentialism without implicating the other.

These debates over whether refugees and trans women deserve to participate in public life are an expression of the deep anxieties at the heart of the Australian colonial project. Together they work to manage the internal and external social boundaries of a nation built on stolen land — who can be a part of it, and how.

Elections hold a magnifying glass to social turbulence and economic precarity, so it’s not surprising when politicians try to hold onto power by appealing to the sense of security national belonging can offer. It’s a cheap tactic that usually works; the more disposable your scapegoats, the better.

And in a country where nearly twice as many women lost jobs as men at the peak of pandemic unemployment, the idea that gender is unstable scares the shit out of people who line their pockets with inequity.

Right now, politicians are feeling out just how much of marginalised people’s humanity they can negotiate in the public eye. Hence the government’s unexplained release of 26 refugees from indefinite onshore detention, and its refusal to release the remaining six — this seems to have somewhat placated public opposition to offshore processing, with Labor also still committed to violating international law by turning back refugees.

This trial-by-fire of public opinion also explains Morrison’s recent backflip on Tasmanian senator Claire Chandler’s transphobic “Save Women’s Sports” bill. It’s starting to feel like a Plebiscite 2.0, except this time the votes actually count. Does that make it better or worse?

We know from research and experience that these public contestations of refugees and trans people’s humanity can incite further reactionary violence, and it’s also just crap for people’s wellbeing. We’re already experiencing unconscionable mental health outcomes, so this is all starting to feel really kinda bad. What’s the best response here?

You on your job, you hating hard

You out of breath, hope you ain’t waiting

Newsrooms have a responsibility to report on marginalised communities with care, rather than uncritically amplifying politicians’ desperate punching-down for clicks. But when journalists and politicians together put our humanity up for public debate we can only refuse their skewed terms, and not let each other be consumed by it.

At the end of the day, what keeps us going is how we show up for one another through the good times and the shit times. That won’t change regardless who wins this election.

Mika Benesh is a writer, researcher and Judaica designer on Dharug Country. He is a non-binary Jewish trans man, and sends godawful tweets at @mizrahigh.