A disarming photograph taken by 22-year old Melbourne photographer Janelle Low of Indiana, a 19-year-old cat in the final days of her life, and her owner Yhonnie Scarce has won the National Photographic Portrait Prize, the Archibald Prize of Painterly Cat Selfies.

The photograph’s success at an artistic and critical level offers incontrovertible proof that photographs of cats are just as deserving of merit in offline forums, if not more so. Said merit includes a $25,000 prize for Low, who told The ABC that “about two weeks ago I was thinking about applying for Centrelink just to get by and just to live.

I was thinking I might have to put photography aside. But this will let me keep going.“

Apply anyway, Janelle. The photograph was selected from 53 finalists by a panel of judges who praised the image for its beguiling simplicity, “a compelling mediation on love, loss and attachment,” that demonstrated technical proficiency in its use of light to reference the golden age of 17th century Dutch genre painting.

Judge and curator Jo Gilmour said of the image, “It’s just this quiet, contemplative, beautiful little image that really draws you in.”

Only days after having her portrait taken, Indiana the cat had to be put down, meaning Low’s is a bittersweet victory; tinged with loss but redeemed by a well-deserved success and the promise of The Future (coincidentally, for more about Cats and The Future, click here).

As such, you can no doubt expect a spin-off novel and filmic adaptation of the portrait probably starring Scarlett Johansson – or at the very least a Tropfest entry – in the next year.

“The Cat With The Green Bowl, “The Girl With The Bangs,” or something similar. 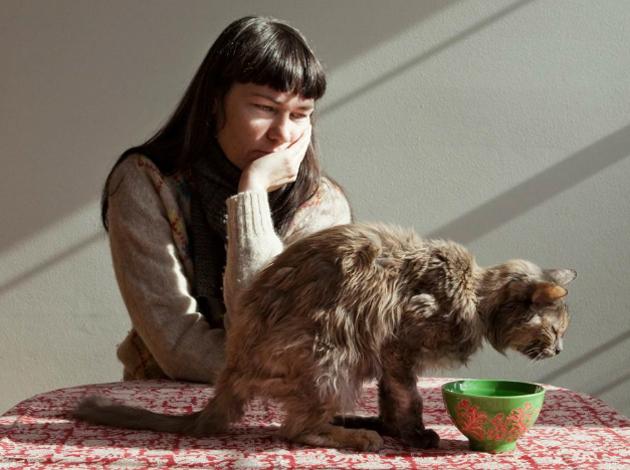 Photo by Janelle Low, via The ABC