Ever wondered how creative, over-achiever peeps landed their dream job? Cue Pez Profile – our brand spankin’ new content series, which gets us chatting to legends killin’ it in their industries. We’re kickin’ off the series with Catherine Biggs / Biggsy is a Dublin-based Special Effects Hair & Make Up Artist, who has spent her fair share of time in Oz, having done work on humans, horses and mannequins. She has accidentally walked on sets during takes, helped actors pee behind bushes on awkward sets, and has worked on some freaking-legit feature films such as Australia, The Great Gatsby, King Arthur and Mad Max, which just saw her land a bloody BAFTA & Oscar combo – go get ’em Biggsy!

RIGHTY OR LEFTY SIDE OF BRAIN?

MOST EMBARRASSING WORK RELATED SITCH YOU’VE EXPERIENCED? One time I thought my career was over because Nicole Kidman accused me of bursting a capillary in her face. But I didn’t and she was super nice to me about it the next day. I’ve knocked over lights and bits of the set and ruined shots, I’ve had to pee behind bushes and hold actors dresses up as they’ve peed behind bushes! Oh and I once thought Jerry Bruckheimer was a photographer and asked if I could take a look at his pictures. He wasn’t a photographer – just the biggest film producer of all time.

WHAT IS ONE PIECE OF ADVICE SOMEONE IN THE INDUSTRY HAS GIVEN YOU THAT YOU’LL NEVER FORGET? I worked on a film called ‘The Eye Of The Storm’ years ago. It was with Geoffrey Rush and Charlotte Rampling and a whole load of other brilliant actors. I remember how cool they all were and they just didn’t give a shit about ridiculous nonsense in the film industry. They had seen it all and done it all and were so good at their jobs. I love it when people can give you advice without words. Instead, they just passed on their epic energy.

WHAT WOULD YOU TELL YOUR TEENAGE SELF RIGHT NOW? I wish my teenage self could come and give me some advice now! I was driven and knew what I wanted then. But maybe I’d tell my young self to buy better clothes and learn more about the history of things.

WHAT SOCIAL MEDIA CHANNEL ARE YOU RELIGIOUSLY ON AND WHY? I’m a bit shit at social media. Instagram would win my prize for a daily check. Pictures are easier than words.

YOU’RE OBVIOUSLY KILLING IT IN YOUR INDUSTRY, BUT DO YOU THINK YOU’RE KILLING IT? I definitely don’t think I’m killing it or that I’ve made it! I don’t really know what that is yet. I think success is mastering something. So even when you have mastered something you still have to practice it everyday. I swear to god I learn something new everyday. A 20 year old model taught me a deadly highlighting trick last week on a fashion shoot. Today I learned not to spray blood into the wind in a battle scene. But I suppose if people want me to do their shoots that’s a good thing? 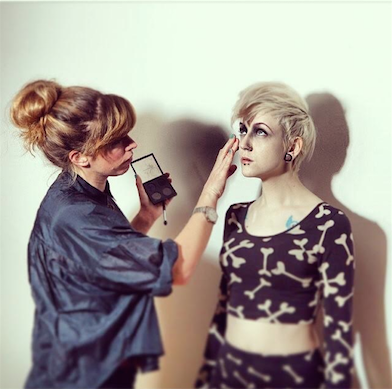 WHAT DO YOU DO WHEN YOU’RE TORN BETWEEN PERSONAL BELIEFS AND PROFESSIONAL OBLIGATIONS? I think I’m lucky that those jobs haven’t come my way. I’m not crazy about guns so I try and leave set when they’re waving them around. I don’t like shows that glamourise violence but its hard to get away from it when you do special effects make up. I do a lot of charity work and work on short films for free if I love the story and what it stands for. I support new film makers that want to tell a great story with integrity.

WHAT DO YOU THINK YOU’D BE DOING IF YOU WEREN’T DOING THIS JOB? A nurse. My mother is a nurse and she’s an excellent human.

IF WE LOGGED INTO YOUR NETFLIX ACCOUNT WHAT WOULD WE SEE IN YOUR RECENTLY WATCHED LIST? Lots of half watched series – I’m shocking bad at not finishing a series. And movies – ‘Clue‘ and ‘Cowspiracy‘.

WHAT IS YOUR GO TO SONG/FOOD/BEVERAGE FOR A PRODUCTIVITY PICK-ME-UP? I always have a coffee machine on the make up bus, and a bunch of vitamins on my desk.

Go to song would be an epic sound track in the morning (‘Braveheart‘ is great) to get the actors in the zone, disco and anything from ‘Hall and Oates‘.

HOW DO YOU KEEP CHILL AF OUTSIDE OF WORK?

We work crazy hours (14-16 hour days) so outside work is part of work sometimes! I love a good podcast on the drive to work and the local news and weather on the way home! I have lots of friends with sweet jobs in PR and Music so I’m a very good plus 1. I also do lots of yoga.

WHAT WOULD YOUR LAST MEAL BE? I’m a vegetarian since watching ‘Cowspiracy‘ (mentioned above) so I would like a make your own veg pizza with 14 bottles of red wine as my last meal please Pedestrian!

I love old people’s street style, especially in Dublin. And the video for Justin Beiber’s “Sorry” – I want all their clothes and dance moves.

Happy ’cause ‘Mad Max’ won the Oscar for BEST HAIR & MAKE UP a few days ago!

WHERE ARE YOU CURRENTLY BASED? I am currently based in Dublin. I like seeing my family and friends after being away so long. I also like how funny people are here without even trying.


HOW HAS YOUR APPROACH TO WORK CHANGED OVER TIME? I am not the youngest person on set anymore. That upsets me! Ah no, it’s nice to be the one that now looks after all the baby make ups. I am more responsible now for the cast and for the team and I love that.

DESCRIBE THE SPACE YOU CREATE YOUR WORK IN. We have make up rooms when we’re in the studio and we work from trucks when we’re on location. I own many puffer jackets and hiking boots. Today I was shooting on the mountains just south of Dublin and when I worked in the desert in Africa I had to wear goggles because of the sand storms. Being a film make up artist is probably one of the least glamorous jobs in the world!

Highlight – teaching women going through chemo how to do their make up so they feel good enough to leave their house. Travelling and meeting interesting brilliant people.

MOST CRINGE-WORTHY THING YOU’VE WRITTEN ON A CV, COVER LETTER OR LINKEDIN PROFILE? My first CV had a passport photo of me on it. Oh good lord what was I thinking?

Don’t let your dream job slip you by – Love your work!