The Perth Bushfires Have Destroyed Over 70 Homes, Proving We’re Not In The Clear Just Yet

The raging bushfires on the edge of Perth have already destroyed over 70 homes. The flames have burned through almost 10,000 hectares of land stretching from the suburb of Ellenbrook to the nearby town of Wooroloo, with no end yet in sight.

It’s a grave reminder that summer isn’t over, and we’re not in the clear when it comes to bushfires.

“This is a situation the likes of which we have never seen before, a full [coronavirus] lockdown and raging bushfires. It is frightening, and it will test us all,” WA Premier Mark McGowan said on Wednesday.

“To all those impacted by the fires, can I say, every single Western Australian is thinking of you today. We stand ready to help in any way that we can.”

200+ firefighters are still working tirelessly in extreme terrain & conditions at the Wooroloo #bushfire. Erratic fire behaviour fanned by strong winds continues to challenge crews on the frontline who are protecting what they can & putting containment lines in place. #perthfires pic.twitter.com/7NUTLz0IWU

Department of Fire and Emergency Services (DFES) Commissioner Darren Klemm told reporters that the time to evacuate is now.

“That north-west corner of the fire is extremely difficult to control,” he said.

“I want to reiterate that it is absolutely critical that people enact their bushfire plan now and if your decision is to leave, leave now.

“We’re only going to see the wind strengthen over the course of the day, which will make that fire in difficult, steep terrain difficult to stop running up the hill towards Shady Hills estate.”

But while people have so far been able to escape relatively unscathed, the same can’t be said for their homes and livelihoods.

People affected by the fires will now be eligible for a $1,000 disaster recovery payment per adult and $400 per child.

The Perth Lord Mayor’s Disaster Relief Fund – which has been assisting with bushfires and floods for decades – was once again activated on Wednesday afternoon, raising over $60,000 from public donations in its first 30 minutes online. You can contribute here.

The state government has also chipped in $2 million to the Disaster Relief Fund.

On top of that, a bunch of the Aussies who’ve lost their homes are turning to GoFundMe to rebuild.

“Within hours of the reports of the first loss of homes in Perth Hills, Australians responded with compassion and action, already raising over $100,000 to help those impacted,” said GoFundMe’s senior regional manager Nicola Britton. 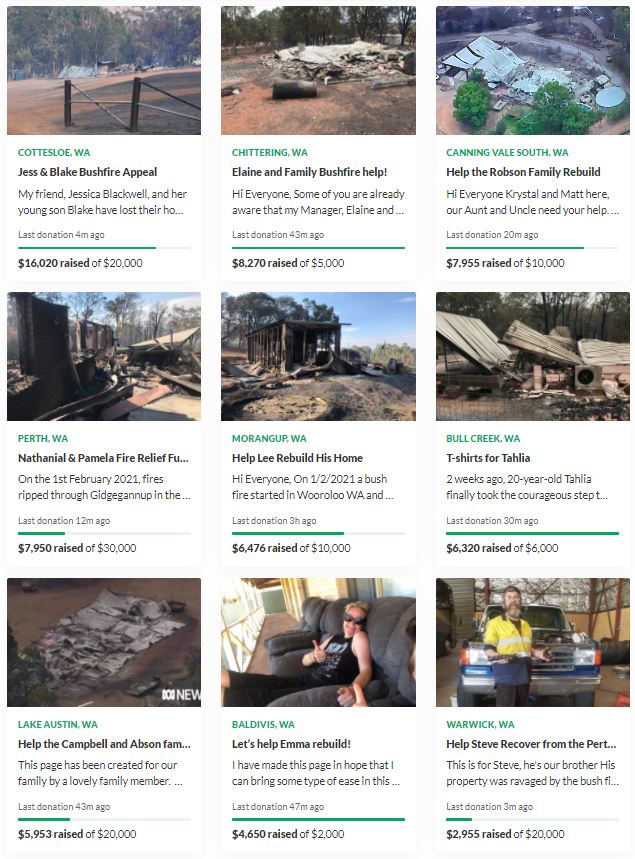 There are countless stories of people raising money for their mates, family members and even colleagues. While most people have insurance, basic things like emergency accommodation are still super expensive.

There are also a few charities which are definitely worth donating to.

All donations made to the Red Cross during this will be used to help people on the ground.

“Should the funds raised exceed the cost of our emergency services in WA, the excess will be used to support our emergency work in other states,” the organisation stated.

READ MORE
Turns Out Smoke From The 2020 Bushfires Actually Cooled The Whole Planet Down, So There’s That

As we saw with last summer’s bushfires, animals can also be severely affected.

That’s why WA-based Native Animal Rescue is taking donations. It says it costs around $130 to nurse rescued animals back into the wild.

Although the fires are still blazing, it’s heartening to see so many Aussies stepping up to help those in their time of need.