Guess what, Australia: even the humblest of protests against the gender pay gap seems to result in furious debate. And maybe that’s actually a good thing.

At least, that’s what the University of Queensland Union’s upcoming Feminist Week bake sale has proven, after it was announced the tasty treats on offer will be priced according to the customer’s gender and profession.

While the one-off, non-binding bake sale is obviously a simple ideological exercise demonstrating the principles of Australia’s pay disparity in stunningly basic terms, those who have found themselves looking at full-priced cupcakes have had a spray online.

On the University’s UQ Stalker Facebook page, one user has highlighted the state’s anti-discrimination laws; he reminded users “at the state level, [The Anti Discrimination Act] sets out that a person who supplies goods and services must not discriminate against another person in the terms on which goods or services are supplied.” 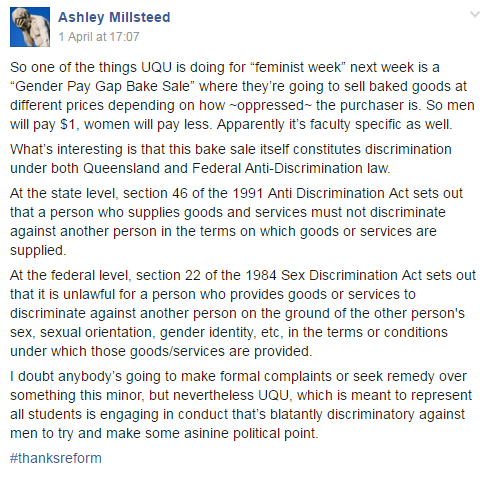 Like, yeah, that’s… exactly what the sale is protesting against.

She said “if people are upset about it, the next question that needs to be asked is ‘Why are you upset about that? Think logically about the reasons why you are upset.”

“You are being asked to think about why it might be that women get paid less over the course of their lifetime.”

While the bake sale lays out the pay gap in explicit and immediately recognisable terms, the numerous and nebulous subtleties of its real-world counterpart have lead some to believe it’s a figment of over-reactive feminist dogma.

Nevertheless, as of last month, the government-backed Workplace Gender Equality Agency found the average pay gap between men and women is hovering around 17%. The World Economic Forum has backed it up too, recently – and sadly – saying at this rate, it’ll take us a cool 118 years to bring men and women’s salaries into line.

The bake sale itself is scheduled for this Tuesday. While it’s unlikely the culturally-entrenched distance between our earnings will be instantly fixed by lamingtons and honeyjoys, it sounds like a bloody delicious place to start.