As somebody who has struggled with endometriosis, ovarian cysts and all sorts of menstrual-related issues for as long as I can remember, living in a state of almost-constant pain has become my normal.

I’ve tried everything from smoking weed to invasive surgery in an attempt to live a somewhat normal life, or at least be able to make it through the day without needing to medicate.

Sure, painkillers exist. But when you’re dealing with a pain that rarely subsides, the thought of popping an ibuprofen every single day is pretty daunting (and probably not very good for you). But then I heard about the Ovira.

According to the website, the Ovira is a drug-free pain management device that offers instant relief for menstrual pain.

“By using pulse therapy, Ovira stimulates the nerves and stops your period pain instantly. No pills, no side effects, no interruptions to your day,” the product description reads.

It retails for $189 with a 100 day risk-free trial if you’re not happy with the product.

To make it even more enticing, the company is founded and run by Alice Williams, so you’re not only supporting a female-run business, but the whole product was designed to soothe her own pain.

Obviously, this product isn’t going to be for everyone, and I can only speak from personal experience. For context: it’s been about a year since I had a laparoscopic surgery for my endometriosis, which unfortunately means the pain is starting to come back. By no means is it as crippling as it used to be, but I imagine it’s worse than your average period pain.

When my Ovira first arrived, I was instantly impressed by the packaging. It comes in a cute peach-coloured box for storage, and also has one of those sunglasses baggies if you need to travel with it.

I know, aesthetics aren’t everything, but as a chronic pain sufferer, it’s nice to have a product that doesn’t immediately make me feel like I’m a science experiment. 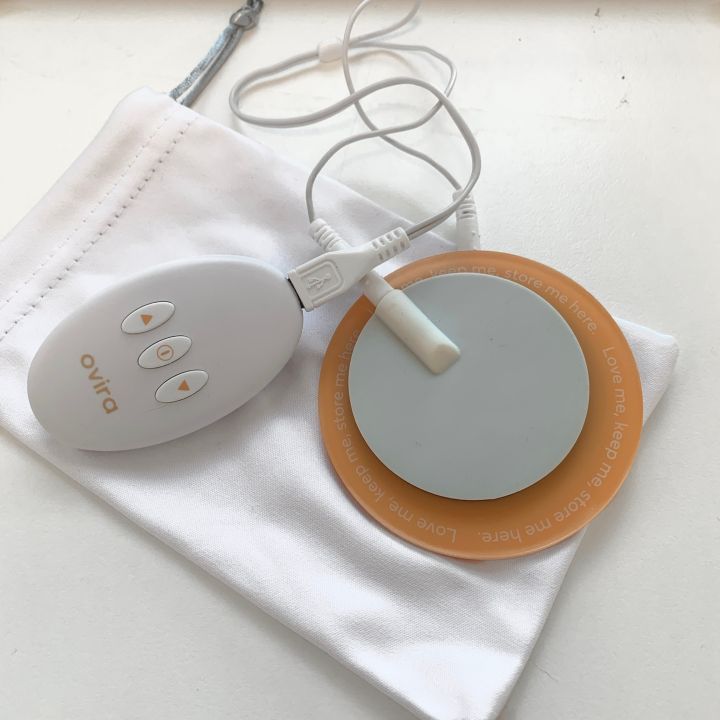 From the photos, I was expecting the device to be a lot bigger and bulkier than it is. You know, the way even a “discreet” medical device (like a hearing aid) is still very visible.

After reading up on how the device actually works, I was surprised to find that they use transcutaneous electrical nerve stimulation (TENS). I’ve used a TENS machine before to treat back pain after sporting injuries, but I was completely unaware the technology could also work for menstrual pain.

“Ovira is based around an electrical nerve therapy commonly referred to as TENS (transcutaneous electrical nerve stimulation). By using low-level pulses of electrical vibrations she is essentially able to overwhelm the brain’s receptors, blocking the pain signals from entering,” founder Alice Williams explained to PEDESTRIAN.TV

You can adjust the power of the electrical vibrations according to your pain level and personal preference. On the lowest level, I could barely feel it, while the highest level was *too much* to handle. But the middle ground seems like the perfect amount of pulsing to relax my muscles without really feeling it.

I wouldn’t necessarily describe it as “instant” relief, but within an hour of wearing it, I’m no longer in pain (or at least the excruciating levels I was earlier), so it clearly does *something*.

To be honest, I wouldn’t use this as the same sort of instant pain relief you’d expect from a Neurofen Zavance, it’s more something I’ve learned to incorporate into my daily life when I’m suffering from a bit of a flare up.

When I’ve got my period, or I’m just having an otherwise painful time, I’ll just put it straight on when I wake up as a bit of a preventative measure. It soothes whatever pain I do have, and generally prevents my pain from getting to that so-bad-I-physically-can’t-get-out-of-bed level.

This product isn’t a miracle cure for every woman’s pain (although they do have a tonne of 5-star reviews). In my opinion, it’s a really great alternative to pain-killers, especially if your pain is so regular that you’d otherwise be reaching for an ibuprofen most days.

If you’re not too keen on painkillers and have been unsuccessful with other options, this could be worth a try.

“I’d tried all the available options—copious amounts of painkillers, hot water bottles, natural and homeopathic treatments. I’d stopped just short of surgery. I wanted to find another way that was still really rooted in science but that was more…holistic, that took my long-term wellbeing into account,” Alice said.

Obviously, there’s times when you really just need a pain killer, and times when you can’t use the Ovira (it’s not water-safe and can’t be hidden under super-tight clothing). But personally, the Ovira has allowed me to drastically reduce the amount of pain killers I need to take (yay).

$189 is quite an investment, and honestly, I’m a massive cheapo who was hesitant to pay that for a product that I hadn’t tried. But when you consider the ongoing cost of pharmaceutical drugs (both OTC and prescription) compared to the one-time cost of the Ovira, it’s really not that bad. And they’ve got a 100 day money-back guarantee, so you’re only really paying for it if it works.

It’s FDA approved and is registered with the Therapeutic Goods Administration, which means that even if it’s not quite right for you, it’s at least safe to try.

Would I recommend it? Everyone’s body is different, and what works for me won’t necessarily work for you. But speaking entirely from personal experience, the Ovira is at least worth trying if you suffer from endometriosis/PCOS/severe menstrual pain.