A swathe of NSW HSC students sent DMs to award-winning Vietnamese-American poet Ocean Vuong, and have woken up to find that their messages have been put on BLAST on Vuong’s Instagram story in the most beautiful way possible.

The HSC is already a lot of fkn pressure (it’s the series of exams you do at the end of year 12 in NSW, which can determine what university you get into), but when you chuck the kids a highly intellectual poem about culture, life, love and death, you can probably expect them to roll their eyes and complain — and of course, complain they did.

In this year’s HSC English exam, students were asked to give an observant eye to a passage from Vuong’s 2019 novel ‘On Earth We’re Briefly Gorgeous’, titled ‘Little Dog’.

READ MORE
Can We Talk About How Fucked It Is That We Had To Ask Permission To Pee In High School?

The excerpt details a moment where Vuong plucks grey hairs from his Vietnamese grandmother while she tells him stories. You’d think such a beautiful moment would inspiring and thought-provoking, but it appears many were left confused and annoyed by having to read something ~intellectual~.

Ocean Vuong's responses to the HSC students who had to write about his book in yesterday's exam have me SCREAMING pic.twitter.com/LP4aozcJlx

Initially posting a picture of a dog to his Instagram Story captioned “yo, what the hell is an HSC exam and why re all of y’all failing it?”, Vuong shared a bunch of responses and messages by students (and even a student’s mother???) flooding his DMs with angry expressions of dismay after the exam.

One mother asked him to explain his text to her in the DMs, because her son didn’t understand it. Other students messaged Vuong saying they’re going to fail their HSC because of him, with some asking what his text was actually about.

Vuong, being the icon that he is, responding by roasting the fuck out of these salty kids, before actually giving an inspiring anecdote about how school grades aren’t the be-all-end-all of your life. The duality, we love to see it. 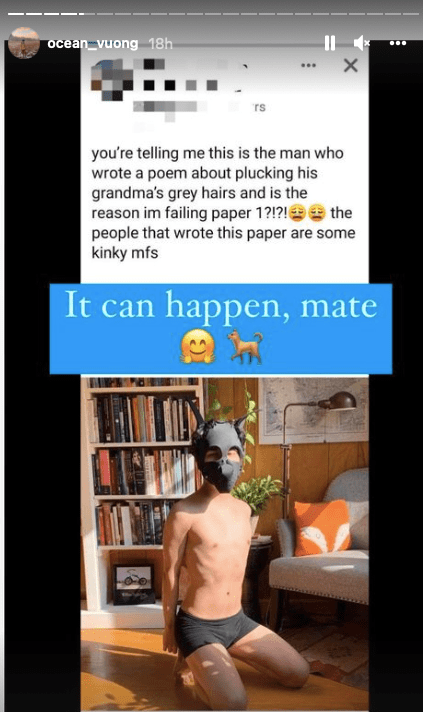 After having fun with the responses, Vuong posted a story saying: “For what it’s worth, I didn’t get into ‘uni’ either out of high school. I went to a local community college where I did some of my best learning (I was introduced to Foucault and Annie Dillard in Comp 101!)”. 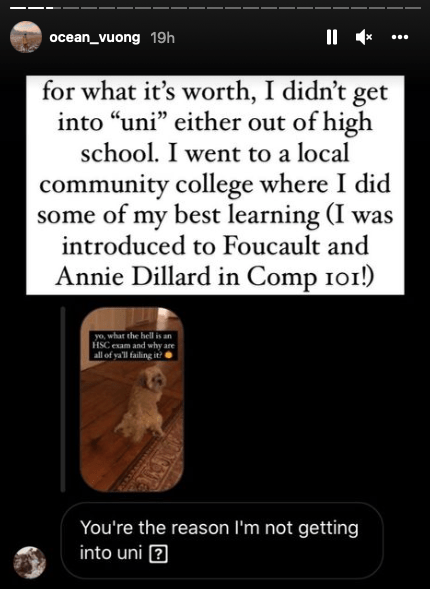 Moral of the story: don’t harass award winning writers just because you don’t understand their work, and your high school exams aren’t everything.