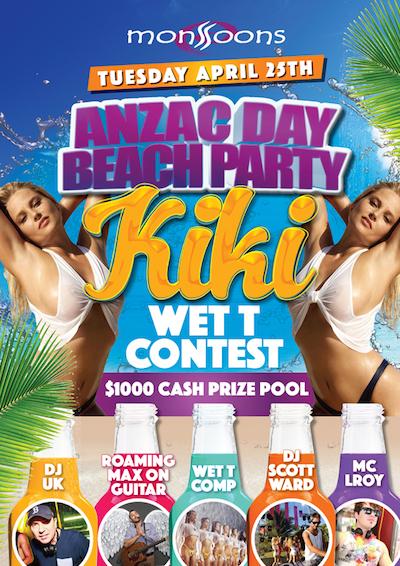 The venue, Monsoons, was slammed by Darwin RSL president Don Milford, who told the NT News that that’s probably a bit of a tasteless way to honour the troops:

“Its very inappropriate and I would have thought the management of Monsoons had a bit better common sense than that.

“I’m disappointed that an organisation in Darwin would be so stupid to do something like that.”

Monsoons, to their credit, handled the criticism quite gracefully, postponing the wet t-shirt contest and donating the $1000 prize money to veterans’ charity Soldier On, in addition to committing funds from the entirety of their April fundraising proceeds.

The venue posted an apology to their Facebook page, describing the event as “naïve”:

“We have spoken to both the RSL and SOLDIER ON in regard to the decision reached today and while they left it open to Monsoons management to make their own promotional and trading decisions it became apparent to us that the activity we had promoted was not in line with today’s commemorations. We apologise for our naïve approach and lack of proper thought when organising our activities calendar.

“We hope everyone enjoys a safe Anzac Day.”