Friends, the National Health and Medical Research Council (NHMRC) has churned out some new alcohol guidelines, just in time for the silly season. So if you’re wondering just how much you should or should not be drinking this Christmas, strap in.

The NHMRC released three main guidelines on Tuesday: the first is for general adults, the second for children and teens aged under 18, and the third for women who are breastfeeding.

According to experts, healthy adults should sink no more than 10 standard drinks a week. That’s down from the previous guideline from 2009, which recommended no more than 14 drinks per week.

On any one day, experts say no more than four standard drinks.

Why the change? Well, it’s got something to do with alcohol’s link to certain cancers.

Compared to 2009, when the last guidelines were released, experts now know even relatively low levels of drinking can increase a person’s risk of developing cancer.

“This includes common cancers such as bowel and breast,” Professor Kate Conigrave, the Chair of the NHMRC Alcohol Working Committee, said.

“That link between alcohol and cancer has led many countries around the world to lower their recommendations on the maximum quantity of alcohol a person should consume,” she said.

Conigrave explained that the new guidelines are the result of well-researched and carefully considered information aimed to help Aussies make informed choices around alcohol.

But to fully grasp the guidelines, people need to understand what a standard drink means whether that’s a beer, wine, cider, or spirit.

Lucky for us, the NHMRC has whipped up a handy guide on what a standard drink is as defined in the Australian and New Zealand Food Standards Code. 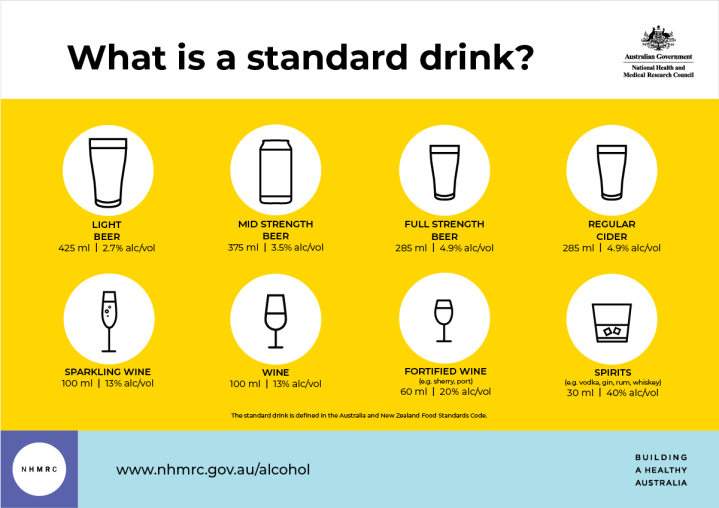 The second guideline says children and people under the age of 18 years shouldn’t drink alcohol.

“The evidence is now clear that alcohol can cause long term harm to users under the age of 18 by interfering with the development and function of the immature brain,” paediatrician Elizabeth Elliott said, who is also the director of the NHMRC Centre of Research Excellence in Fetal Alcohol Spectrum.

The final guideline urges against women consuming alcohol while breastfeeding.

“Research shows that alcohol and its bi-products cross into the breast milk and may harm the breastfeeding child,” Elliott explained, adding that the third guideline is “sound advice that not drinking alcohol is safest for the baby.”

You can read more about the NHMRC’s guidelines to reducing risks from drinking alcohol, right HERE.