Momo Is Absolutely Not A Thing, Despite The Insane Media Panic

The cool thing about the internet is that you can completely make some shit up, throw it out there and watch it snowball over the course of weeks, months and years, ping-ponging between social media and news outlets, until it actually becomes true. Sure, it might contribute to the erosion of our understanding of universal truth and ultimately precipitate the collapse of civilisation, but it’s pretty funny in the interim.

Among thoroughly weird ranks of moral panic-inducing internet hoaxes, there is one which just won’t fucking die: Momo. Goddamn Momo. In any given second there are mums making trillions of posts on Facebook about how the cursed creature Momo is telling their darling son Crayden to kill himself on YouTube.

We first went through the insane news cycle back in July 2018, when everyone from news.com.au to SBS was reporting that this image and its associated ‘challenge’ was linked with the suicide of a 12-year-old girl in Argentina.

But local authorities never conclusively linked the girl’s death to the Momo challenge.  This is a theme: literally every cited case of a suicide victim being ‘encouraged’ by Momo ends up having absolutely no definitive link established. Turns out that self-harm and suicide is often the result of a complex series of factors, and not just an internet challenge based around a scary photo.

Despite the wash of coverage, actual examples of Momo popping up in kids YouTube videos are few and far between. For something which is apparently an absolute epidemic among kids on the social media, actual examples are very, very scarce.

Here’s this, from a Washington Post article pointing out that this whole thing is basically a hoax all the way back in September 2018:

“The Momo thing is much more akin to an urban legend right now,” said ReignBot, a YouTuber famous for videos exploring creepy things on the Internet. ReignBot’s video about the “Momo Challenge” has more than 2 million views.

“People are claiming what Momo is and what Momo does, but not that many people have actually interacted with the account,” she said. “Finding screenshots of interactions with Momo is nearly impossible and you’d think there’d be more for such a supposedly widespread thing.”

So why is it back in the media? Because Kim Kardashian posted about it. 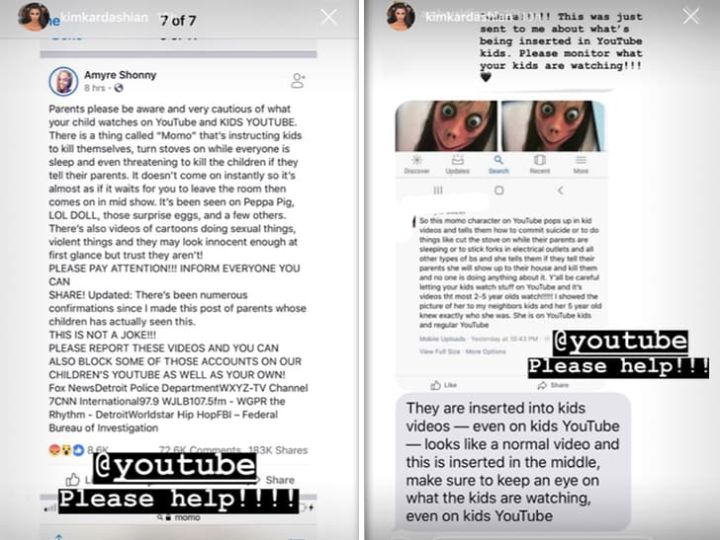 Despite the fact YouTube have come out and said that there’s no evidence of this stuff being on their platform in any appreciable quantity, Australian media is once again absolutely consumed by Momo fever.

Take this absolutely wild segment on Kyle and Jackie-O and its associated article.

“This is all over the world this stuff…this isn’t just a little thing. This is world wide. This is a big problem,” Kyle says in the segment. “Kids are going to die if something’s not done about it.”

Or A Current Affair, which dedicated a segment to the Momo panic. Watching this stuff, you really get the sense that it has the same rhythms of any kind of moral panic adults thrust onto kids in sensitive stages of development – like, for example, when they play too much Fortnite.

Spurring insane panic among parents is probably significantly more dangerous than any content your kids are stumbling across. That’s the angle taken by a series of UK charities, which have slammed the Momo challenge as “fake news” spread by adults. From charity Samaritans:

Currently we’re not aware of any verified evidence in this country or beyond linking Momo to suicide. What’s more important is parents and people who work with children concentrate on broad online safety guidelines.

Samaritans goes on to say that the carelessness of the media’s reporting on this likely hoax is “raising the risk of harm”.

“These stories being highly publicised and starting a panic means vulnerable people get to know about it and that creates a risk.”

There are definitely issues with kids content on YouTube. We’ve covered it before. But it largely comes down to age-inappropriate and (occasionally) sexually explicit content which slides past the platform’s filtering. This is a serious concern, obviously – but it’s definitely different than a weird Japanese doll encouraging kids to commit suicide en masse, which looks mostly like a hoax spread by misinformed adults.

Basically this is what I’m saying: everyone shut up about Momo. Thank you.