Areas of Melbourne are currently experiencing air quality that’s comfortably in the “hazardous” range, and a thick blanket of smoke haze has virtually erased the city skyline.

A shade over a month after bushfire smoke drifted over Sydney, setting off fire alarms in train stations and prompting snap climate protests across the city, Melbourne has finally copped the full force of the bushfire after-effects, with a blanket of smoke dropping across the city overnight, leading to a morning of rough lungs and a virtually invisible city.

While the air quality in the city is lingering in “very unhealthy” levels according to Air Quality Index readings, out in Box Hill in the city’s east, hazardous readings are being reported, with air quality sitting around 6 times above ordinarily safe pollutant levels. 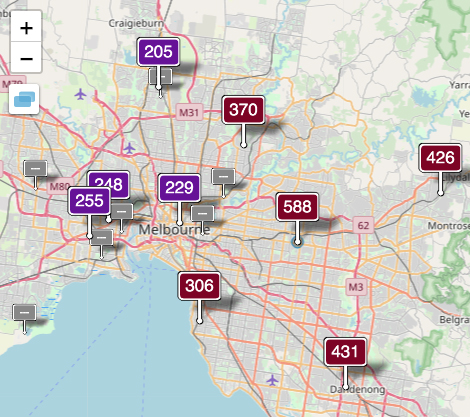 Across social media, punters have been posting photos of the haze sitting across the Melbourne CBD, which is casting an eerie burnt grey hue on what should otherwise be a fairly glorious summer’s day.

Visibility is horrible and you can taste the smoke in the air in Melbourne. A global ranking website rated us as having the second worst air quality in the world at one point overnight. ⁦@abcmelbourne⁩ ⁦@abcnews⁩ ⁦@BreakfastNews⁩ pic.twitter.com/VAJpgogDta

#melbournesmoke
Thanks #ScottyfromMarketing for our new normal. Just loving filling my lungs with smoke. pic.twitter.com/zLpTcaHhxK

Melbourne is facing an air quality emergency Tuesday as hazardous levels of smoke haze engulf the city ????. As pollution levels skyrocket, the @EPA_Victoria is warning now even healthy Victorians could experience symptoms including coughing & shortness of breath #melbournesmoke pic.twitter.com/gJVoD6RhyJ

This is no fog. This is just a smoke from all the ????. Apparently there are no masks left in Victoria and NSW. Interesting times ahead.#melbournesmoke #Melbourne pic.twitter.com/vgb3QuZwUf

The smoke has, understandably, thrown various plans across the city into chaos. Not least of which includes the Australian Open, which has been forced to scuttle planned practice sessions and tournament qualifying matchups scheduled for today.

Further decisions will be made based on onsite data, and in close consultation with our medical team, the Bureau of Meteorology and scientists from EPA Victoria.

As always the health and safety of our players, our staff and our fans is our priority.

Questions are now being asked as to how any lingering smoke may affect the tournament proper, which is scheduled to begin next Monday.

The Bureau of Meteorology asserts that the smoke haze will begin to clear across western and central parts of the state tomorrow afternoon, however it will not clear from Melbourne and the bulk of the state until later tomorrow night.

Widespread smoke across central and eastern #Victoria today, including the #Melbourne area. Smoke haze will begin to clear western and central parts tomorrow afternoon, but is not expected to clear properly until Wednesday night. https://t.co/BQEpwrEDgw @EPA_Victoria pic.twitter.com/bJ9pUc7jKi