We’re Not Saying Melbourne Public Transport Stole Its Colours From Shapes, But…

Honestly, I’ve lived in Melbourne and almost exclusively ridden public transport for the better part of a decade and I’m furious – FURIOUS – that I didn’t make this connection before now. The various public transport options that dot around Melbourne are known for their confusing ticketing system, “interesting” relationship with reliability, but perhaps most of all their fairly distinctive colour schemes. But if that scheme felt oddly familiar at all, it turns out that’s because you’ve walked past it probably a thousand times in the supermarket biscuit aisle.

Hold onto your butts, folks. This is a doozy.

Thanks to some intrepid folk on the internet, it would appear that every form of Melbourne public transport – bus, Metro train, V-Line train, and tram – has a colour equivalent in the form of a box of Arnott’s Shapes.

Honestly, this almost too coincidental. The speckled fleet of sparkly new bright green E Class trams lines up perfectly with the classic box of Barbecue Shapes. The purple decals of the V-Line are a dead ringer for Pizza Shapes. The orange PT buses have Chicken Crimpy written all over them. And the blue suburban Metro Trains are the dead spit of Nacho Cheese.

Don’t just take our word for it, cop this side-by-side comparison on for size. 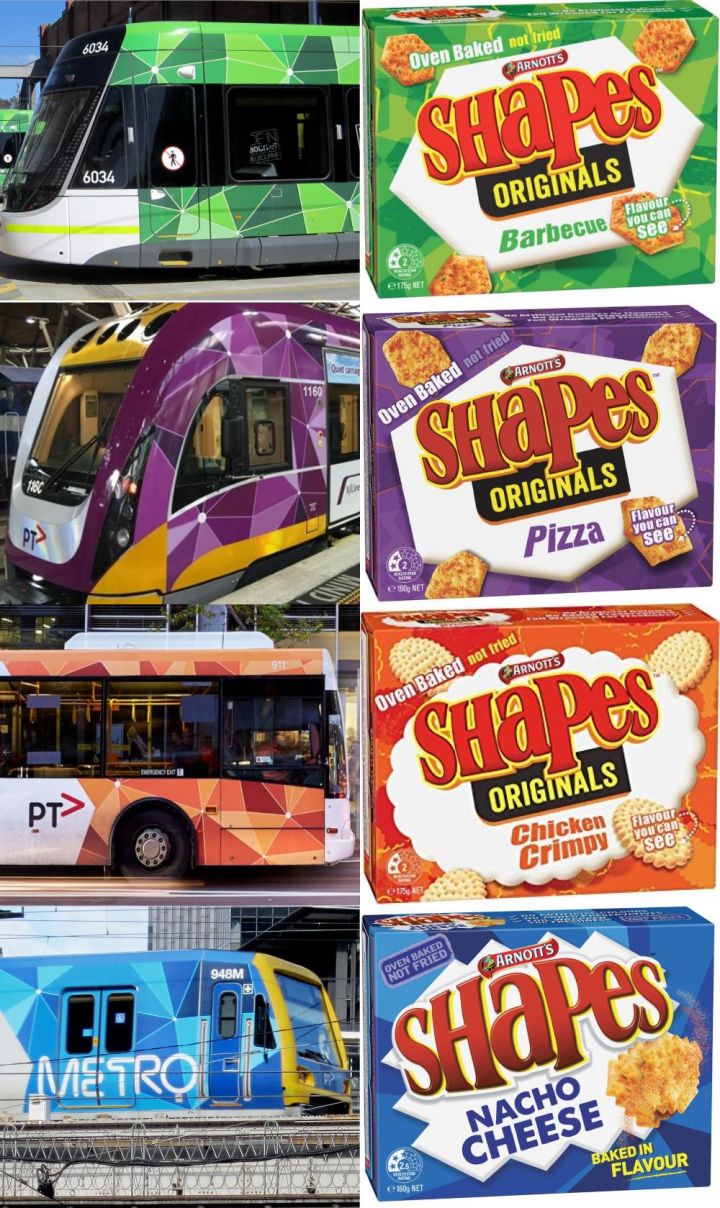 (the full set in one tweet, ICYMI)
Thanks to @sortius for bus and V/Line.
There was no sponsorship from Arnotts for this! pic.twitter.com/xtFn3scjtc

It gets better. The whole shebang kicked off on Twitter when Shaun Micallef’s Mad as Hell cast member/all-around good lad Tosh Greenslade pointed out the fact that the current Public Transport Victoria slogan bares a pretty good resemblance to the one emblazoned on every Shapes box.

Why have @ptv_official stolen their slogan from Barbecue Shapes? pic.twitter.com/YY0d3Fgl3V

So there you bloody go. Hop on the Barbecue and ride it into the city where you can hop off at a major station and catch a Nacho Cheese or Pizza home, unless the Nacho Cheeses are out, in which case you’ll have to wait hours for a replacement Chicken Crimpy.