A café in south-east Melbourne has copped massive backlash after posting a purportedly tongue-in-cheek sign asking supporters of Premier Dan Andrews to pay $1 extra for their coffee.

The sign at the Acrobar café in Moorabbin was spotted yesterday and posted to Reddit, and began circulating social media shortly thereafter.

The sign asserts “Do you support Dan? Add $1 to your order,” before stating that the café has “introduced a RED surcharge of $1 to every order for those people who think Dan is doing a great job.”

“These additional funds are much appreciated. Thank you,” the sign concludes. 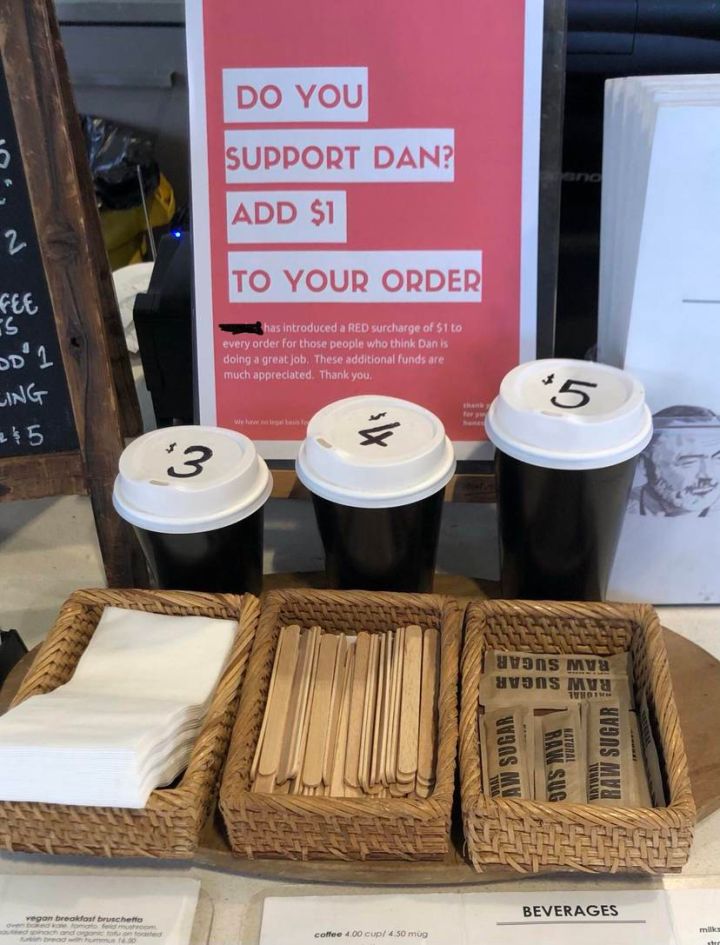 Though owner Franz Madlener claims the sign was not “anti-Labor” or politically motivated in anyway, it did nonetheless bite him on the ass more than somewhat.

After photos of the sign appeared online, the restaurant was besieged with one-star reviews on both Facebook and Google.

Madlener appeared on The Today Show this morning and confirmed that Victoria Police had even intervened, suggesting he take the sign down in a bid to mitigate any further trouble.

During that appearance, Madlener claimed he and his staff had been subject to “vile” personal attacks in the 24 hours since the sign went viral.

“In the last 24 hours, I guess since this sign’s gone viral, the level of abuse and vile anger and personal attacks on the business, me and the staff yesterday, was completely over the top,” he said, adding that it was “to the extent that we had threats during the day of rocks being thrown through the window and someone rang and said they’re going to do to our business what happened to Daniel Andrews’ shop front, which was a rock through the window and paint all over the shop front. So we’ve had security on all night. It’s been a long night.”

Under the Melbourne café restrictions, Arcobar has been able to continue trading for takeaway throughout the entire lockdown period. However Madlener claims that, despite that, “We’ve lost a couple of hundred thousand dollars during this period,” and that “we’re just not going to be lectured to … ‘be grateful you can have 10 people in two weeks’ time’ – no I’m not grateful at all.”

The point to be raised there is that we could’ve blindly opened back up weeks ago to appease the roar of business owners and economists with no formal training in public health and crisis response. But then again we could’ve also been looking at a third wave soon if that were the case too. So in a What’s Worse pissing contest, it’s not hard to pick a favourite.

Despite all this, Madlener swears black and blue that the sign was “only ever meant to have been tongue-in-cheek.”

After seven months of patient waiting you can probably forgive Melburnians a little bit for not having the greatest sense of humour about this sorta stuff.

Still, trolling and threats remain obviously bad, and the juice in this regard will never be worth the squeeze.

A bit of a big mess all around, really.